Felix Sturm continues comeback at 42 against James Kraft this Saturday 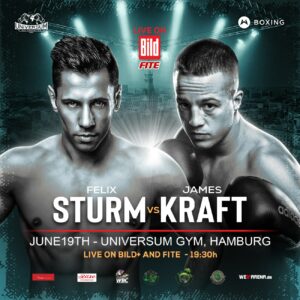 At the age of 42 and with 50 professional fights under his belt, Sturm is scheduled to battle up-and-coming prospect James Kraft on Saturday night over ten rounds at the Universum Gym in Hamburg, Germany.

Kraft is 18 years younger than Sturm and holds a spotless record of 19-0-1 with ten knockouts. But can his youth prevail against the experience of the veteran Sturm, who has had more world title fights (23) over the course of a 20-year professional career than Kraft had fought in total (20)?

No, says Maurice Weber, one of Sturm’s closest friends and new head coach. After Weber successfully filled in for Barry Robinson, who could not get a work visa to be in Sturm’s corner for his comeback ten-round-shutout of Timo Rost in Germany last December, the duo decided to work together from now on, sharing the common goal of a sixth world title for Sturm.

“At first, of course, you have doubts about working with a great friend, “Weber said. “But Felix and I just clicked. We communicate well, and we both try to learn new things every day. He fought a great fight against Rost, but the layoff did show a little.

“I expect him to be much stronger, much sharper on Saturday. We had a great training camp, and he made a lot of progress. Saturday night is another step towards winning another world title, Felix’ sixth as a fighter and my first as a trainer.“

Felix Sturm himself could not agree more: “I think trust plays an important role in sports, in life, and I trust Mo. Outside of trust, it is important to have someone in your corner who loves the sport of boxing, who works hard to improve his skills every day. Yes, Mo is a young trainer, but boxing was always his passion and will always be his passion. Coaching is his passion now, and he does it like no one else I have worked with.

“Honestly, I am always surprised about the new things and ideas he brings to the gym. I didn’t believe I could learn so much more about boxing at my age. I really didn’t. That’s all because of Mo. I strongly believe that he has a long and very successful career ahead of him. Our ultimate goal is to win the world title together.“

World Champion, a dream Maurice Weber has been chasing for most of his life. Six years ago, Weber, who will turn 40 on June 29, came razor close to archiving his dream as he valiantly fought through the pain of a broken hand and scored a knockdown in a world title challenge against then-WBA champ Jack Culcay – only to come up short in a close decision loss.

The injury eventually forced Weber to hang up his gloves, but he could not stay away from boxing for too long. “I love this sport, “Weber said. “I’ve been in boxing for most of my life, and I feel that I can still contribute a lot to it. I don’t have any regrets about my career. My second one, though, will be even more successful.“

Weber is soaking up all the knowledge he can get to improve himself as a trainer, but he also works with the experience he gained as a fighter himself. “Look, I had quite a few trainers myself, and most of them taught every fighter, no matter the style, no matter the weight, the same things and had them do the same exercises in the same intensity.

“When I started as a novice, I had to do the same training routine as seasoned world champions. I was constantly over trained. Like the great Roy Jones said, training hard is good, necessary of course, but training smart is even better.

“That’s what I am aiming for: hard but smart training.“ When asked about a role model, Weber explained that “I want to find my own style, my own methods“: “I have tremendous respect for the great trainers in the game, and I spend countless hours on YouTube, watching fights and the interactions between the fighters and their trainers. But in the end, I don’t want to be a second-rate version of someone else. I’d rather be a first-rate version of myself.“

To offer every one of his pupils the best guidance possible, Weber has decided to keep his stable of fighters small: “Communication is the most important thing. If I don’t connect with a fighter, why should we work together? It wouldn’t make sense for either one of us. If I have too many fighters, I won’t offer them the effort each fighter deserves. I experienced that first-hand myself. Communication would suffer, training would suffer, the results would suffer. That’s why I decided to only work with a select few.“

Nevertheless, Weber will have a busy night on Saturday as he will be working the corner of four of his fighters, including Sturm. One of them is light welterweight Ilias Kallouch, a 20-year old kid who is 2-0 as a professional.

“I’ve never seen a fighter at 140who hits as hard as Ilias – never“, Weber stated. “The sky is the limit for this kid.“ Also, former female world kickboxing champion Hanna Hansen and light middleweight Malik Aksadal will make their respective professional boxing debuts with Weber in their corner on the undercard.

The Sturm vs. Kraft event on Saturday night is available as an online PPV on Bild+, the subscription service of the German daily paper Bild.