Fight Academy heads to Scotland on Friday February 18 on Fightzone 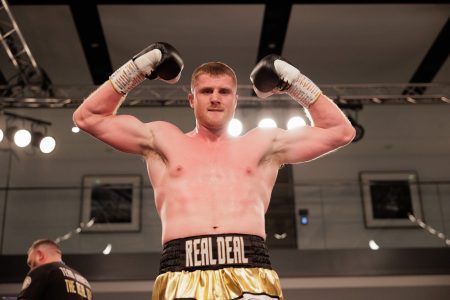 Fight Academy will head to Scotland on Friday February 18th for a night of boxing, in association with top Scottish promoter, Sam Kynoch.

With boxing shows currently suspended in January, passionate fans North of the Border get a welcome return of the sport at a venue that always delivers a great atmosphere – the Trump Turnberry resort in Ayr.

The card will feature some of Scotland’s best young fighters including exciting cruiserweight, David Jamieson (pictured) in his first title fight; Commonwealth Featherweight Champ, Nathaniel Collins; the return of unbeaten 12-0 welterweight prospect, Michael McGurk; as well as another highly-rated Scottish fighter, Kieran Smith, who has lost just once in 17 fights.

In more great news for fight fans, the event will also be aired live by the UK’s newest boxing broadcaster, Fightzone.

“The Trump Turnberry, in my opinion, is one of the best hotels in Scotland.  It’s a great boxing venue, and a really prestigious venue,” said Kynoch.  “It’s going to be a big weekend of boxing because I have my own promotion there the next night (Saturday 19th February) – so that’s two shows in two nights!  On the Friday night though, we’ll be showcasing all the Fight Academy fighters, and the following night it’ll be my own event.

“On Friday 18th, we’ll have David Jamieson headlining and we have some really exciting plans for him – he’ll be getting a step up and will fight for a belt.  There’s been talk of him facing rival Iain Martell, who’s unbeaten [11-0] – that will be a good fight and David would fight him tomorrow!  That’s a fight we’re working towards but we’ll get him in a testing fight on this upcoming show.  He’ll hopefully secure his first title and showcase what he can do.  David is a very entertaining fighter.  Fans love the big guys, and when you get an aggressive cruiserweight like him – he’s going to be in a lot of fun fights with his style.

“Nathaniel Collins is an absolute class act who has mixed with the best in the world in sparring.  I see what he can do in the gym, and he’s special.  The Commonwealth is a great level to be at, but we’re only scratching the surface with him and he has all the credentials to be Scotland’s next big boxing star.  He had a really impressive amateur career and as a pro he’s stepped up every fight and shown a bit more.  There’s a lot more to come from him, and Scottish fight fans should follow his journey because he’s going to be the next standout Scottish fighter.”

“We are delighted to be returning to Scotland,” said Fightzone’s Chief Operating Officer, Asif Vali.  “Fightzone has already shown some fantastic events from North of the Border, and we know you’re always guaranteed great action and a very special atmosphere.  The fight scene in Scotland hasn’t always had the coverage it deserves, there’s some brilliant talent up there and Fightzone is committed to giving these fighters the exposure they deserve.”