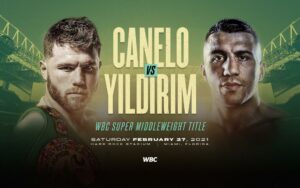 Unfortunately… a prophet is rarely recognized, even in his own hometown.

“How brave! I am sure that he will do his best. Whatever happens… he will do everything possible. ” quoting Don King on the Canelo vs. Yildirim. Most of the community is convinced that Avni’s chances are minimal.

I am absolutely sure that Avni will not shrink around this next challenge, which he knows will be the fight of his life. Rest assured, Avni is a challenging fighter. He is not there to do the numbers. He is convinced that he can win, he aspires to do it and he is doing everything possible to try to achieve an impressive surprise.

In equal measure, but different and not wavering, Saúl “Canelo” Álvarez is not overlooking this fight for a single moment, and he is taking absolutely nothing for granted.

Cautious, rather than cautious by inclination and nature, Canelo knows that all opponents constitute a percentage of risk and with it, a potential potent danger. A sure-fire favorite, he has yet to put on an effective performance at night.

Avni’s manager and friend Ahmet Oner insists that surprises can and do happen. Andy Ruiz tested it against Anthony Joshua, who was making his American debut. An awkward fit equation, which was not balanced or factored correctly, exactly, or adequately.

Joshua was originally supposed to fight Jarrell “Big Baby” Miller. Doping problems arose and Andy jumped in almost at the last minute, when he was offered the opportunity of a lifetime. Bingo! He shook off Anthony and then he hit the jackpot!

Years earlier, Mike Tyson did not view James “Buster” Douglas as a threat and lost focus on the basic necessities of life. Buster was better prepared and highly motivated by the words of his Mother, who died twenty-three days before the fight. Unlike many, she truly believed in him, and he justified his confidence with a legendary performance!

Until that fateful episode, “Iron Mike” wasn’t the only one, who had been absolutely engrossed and in love with his own invincibility. When a Japanese customs official asked Ed Schuyler of the Associated Press how long he expected to work in the country, the laconic answer came immediately: “Oh… about ninety seconds.”

Let’s be honest! It is extremely unlikely that Canelo will be caught off guard or make the same mistake in judgment that is grossly understated.

The big question mark hanging over Avni comes from his stutter in Stuttgart against Chris Eubank Jr, who defeated him in third, during the World Boxing Super Series quarterfinals. Since then, he has made up for that mistake by defeating Marco Antonio Peribán for the vacant WBC international title.

He was getting stronger and visibly more confident against Anthony Dirrell, but a head butt saw Dirrell severely hacked and everything had to be stopped in the 10th. Avni fell short, losing a technical decision. So close and so far… Until now.

Avni’s record is 21-2, 12 KO`s. Canelo`s is 54-1, 36 KO`s. They have both fought and gained at light heavyweight. Now back at his most natural weight, Avni is the physically largest super middleweight, while Canelo is the stockiest, sturdiest and most subtle. Many label Avni a stepping stone. Few consider it a real threat.

Joel Díaz has been Avni’s coach since October 2019. Chepo and Eddy Reynoso have been Canelo’s coaches for half his life!

Things could heat up uncomfortably quickly for Avni in the forge in the Miami heat, unless he can avoid the attack on Canelo’s body.

Avni needs to keep moving perpetually, not allowing Canelo to plant his feet and his punches. A lesson to learn rather than absorb, because this is the relentless school of hard hitting. A moment of loss of concentration could well turn it into a bad day.

Therefore, Avni cannot afford to make major mistakes at this rarefied level, or the momentum of the mountain will come to him! There is an abyss under a precipice. Although Canelo is only thirty, he has accumulated much more experience. A mature world champion in four weight divisions.

Fortunately, there is still no war or words. So far Avni has avoided the mistake of verbal flaunting. Rather, he is employing taciturn respect and restraint. He has used wisely and mainly his right to silence. Same with Canelo. It is mutual respect.

In her masterpiece All Roads Lead to the Sea, Alison McGhee observes: “You are most powerful when you are most silent. People never expect silence. They expect words, emotion, defense, offense. Back and forth. They expect you to jump into the fray with your fists. “

Avni, who is undoubtedly the “Dark Horse”, in all this, he would do well to remain calm and focused at all times, or his footwork and coordination will abandon him, he will sink into its depth, he will find himself a sea. and he will surely drown in a tidal wave of blows.

By the way, if Avni did win, unleashing a seismic global shock wave, surging and rippling through the box from top to bottom, he would be the first Turkish national to hold a world title, but not the first Turkish-born boxer to win one. .

Thanks to the official historian and media director of the WBC, Don Victor Cota, I discovered Anton Christoforidis, who won the vacant NBA light heavyweight world title by UD over Melio Bettina in 1941, he was born in 1917, in Mersin, which was then part of the Ottoman Empire and is now part of modern Turkey. But as a child he moved to Smyrna, now known as Izmir in Anatolia, and then went to Athens, with his mother and two sisters. From then on, he always referred to himself as Greek.

Sometimes big surprises happen, but only once on a blue moon. It should also be shaped like a half moon, to allow Avni to reach out… and catch a shooting star?

Canelo Alvarez & Avni Yildirim Already in Miami Ahead of Saturday Ingrit Valencia: “My Mind is Set on Japan”