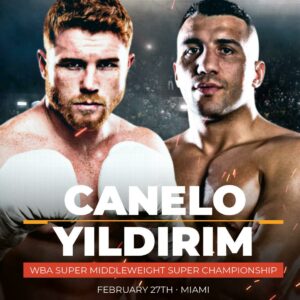 February will have a golden ending this Saturday with the return of Saúl Álvarez to fight Avni Yildirim at the Hard Rock Stadium, in Miami, Florida. The Mexican will put his World Boxing Association (WBA) Super Championship and also the WBC title on the line in a great Super Middleweight bout.

It will be the first defense of the belt for Canelo, who defeated British Callum Smith by unanimous decision in Dallas, Texas, last December 19th. A little more than two months apart, the most mediatic fighter in boxing today will return to the ring to face the Turkish fighter in a city like Miami, where big fights are rare.

Canelo, at 30 years of age, begins the road to his goal of conquering all the belts, but he does not think beyond the immediate challenge he has and knows he must overcome if he wants to make it clear that he is here to unify the division.

Yildirim is a strong fighter with lots of grit who comes highly motivated to fight the best today with all the odds against him. Trained by Joel Díaz, he has made it clear that he has studied Canelo’s weaknesses and wants to surprise everyone.

The 29-year-old Turkish, nicknamed “Mr. Robot”, has won five of his last six fights, except for the last one in which he lost by technical decision in a controversial bout.

Various promotional activities will take place this week, including the fighters’ arrivals at the venue, press conferences and, of course, Friday’s weigh-in ceremony. The event is promoted by Matchroom Boxing and Canelo’s own promotion, while it will be broadcast on DAZN.

On This Day: Terry Norris Defended His WBC Title Against Carl Daniels Michael McKinson: The Extra Time is a Bonus