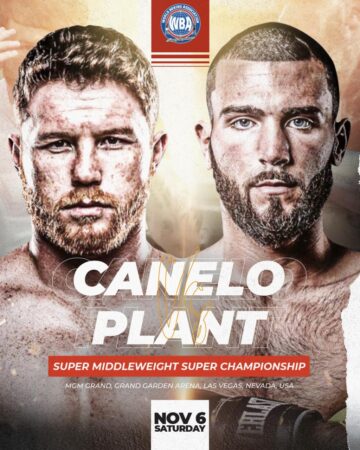 Saúl “Canelo” Álvarez and Caleb Plant will star in one of the most important fights of the year next Saturday night, when they step into the ring at the MGM Grand in Las Vegas, Nevada, to fight for the World Boxing Association (WBA) Super Middleweight Super Championship and the WBC, IBF and WBO belts.

The Mexican holds the WBA crown and also holds the WBC and WBO crowns, while the American is the IBF champion. The winner this Saturday, November 6, will be the undisputed 168 lbs. champion and one of the best pound-for-pound fighters in the world today.

Canelo has had the goal of winning all four crowns for quite some time. He first faced Callum Smith in December 2020 to take the black and gold crown from him, in addition to getting the vacant WBC crown. Later, he targeted Billy Joe Saunders last May, who owned the WBO belt, and now he is going for his last goal with Plant.

The 31-year-old from Guadalajara is the face of the sport today. He hasn’t lost a fight since 2013 and has fought big names in the ring as a demonstration of the great present he is living.

Plant, for his part, is a boxer with an excellent record who has proven to be a warrior both in the ring and in life. At 29 years of age, he is facing the most important fight of his career and claims to have the necessary tools to counter Alvarez, despite the fact that the odds do not favor him. The Tennessee native has made three defenses of the title he holds and now wants to keep everything in this confrontation against Canelo.

The pre-fight has been a heated atmosphere with moments of big arguments and even altercations that have gone to the point of physical aggression. The pride of both fighters is at stake, but only one will become the undisputed champion of the category.