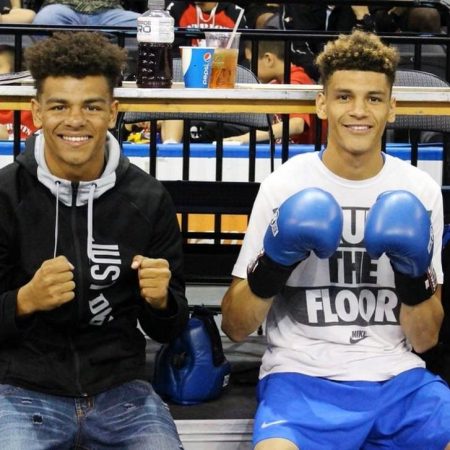 Davidson got into boxing almost by accident. He and Marcus were together playing football at a local recreation center. The season ended and they were about to sign up for baseball, when the boxing coach asked them what sport they were going to get into next. He told them that boxers are stronger than football players. Marcus was immediately a convert, but Marcell really wasn’t into it. He just ran around instead of training and eventually he was banned because he broke a rule. Eventually, Marcell got his act together and he was allowed back in the gym a couple of years later. Both of the Davidson brothers have been there ever since.

As Marcell says, “My brother talks to everybody, and I follow.” So, when Marcus turned pro and signed a managerial contract with Roach, soon afterwards Marcell joined Fighter Locker.

“I was ready to turn pro and stayed in the gym training,” Marcell explained. “We were talking about which manager to sign with. We waited it out and stayed ready. My brother signed before me, and I listened to him talk about Ryan. My brother said Ryan was a great guy and the time was right for me to sign with him, too.

“Ryan is a great guy. I didn’t know anything about him – not even his family in boxing – but he’s a great guy who wants to help us and build our careers. I could definitely tell that he cares and takes care of his fighters.”

Davidson is slated to make his pro debut Feb. 12th on “St. Valentine’s Day Massacre,” presented by Vertex Promotions, at Moseley’s On The Charles in Dedham, Massachusetts.

“I’m very excited,” Marcell spoke about his upcoming pro debut. “You won’t see it, but I’m excited inside. I’ve been waiting for this moment. I’d like to stay very busy this year and maybe move up to 6-rounders by my fifth or sixth pro fight.”

“Marcell is a very skilled fighter,” Roach commented about his newest fighter. “One of his best attributes, which I think will be a huge advantage, is hos 6’ 1” height. We have been discussing him fighting at 135-140 pounds. He is a very athletic, young man with speed and power. He was a nationally ranked fighter who went to the Olympic Qualifiers, so this is a huge signing for my company. I’m excited to have the Davidson brothers under one stable, Fighter Locket. They are very close and do everything together. This will be fun!”