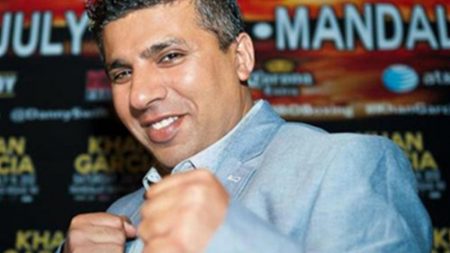 Fightzone is excited to announce the appointment of Asif Vali as Chief Operating Officer on a full time basis.

Fightzone is the revolutionary new boxing channel with a focus on the UK’s ‘small hall’ circuit; broadcasting weekly live shows and shining a light on pro fighters from the beginning of their journeys, and onto world titles.

Since its inception six months ago, Fightzone has won the praises of UK boxing fans and has a growing global audience from countries as diverse as Mexico, Denmark and Ghana – and beyond, including an exciting new deal to show top boxing talent from Canada.

The channel has already delivered ‘fight of the year’ contenders; Area, English and British Title fights, and now also has two ‘world’ champions on its roster with both Hannah Rankin and Jack Massey winning WBA and IBO crowns in front of the Fightzone cameras recently.

After a successful launch, the broadcaster is looking forward to continuing to revolutionise boxing in 2022, and Vali is delighted to be part of the process.  The Bolton fight-figure has been involved in the sport at the very highest level – including being the former manager of superstar Amir Khan – and will bring a wealth of valuable experience to the table.

“I’m delighted to be involved,” said Asif.  “After a short consultancy role with Fightzone, I immediately saw what a great operation the channel is, and have been impressed by its structure and plans for the future.

“Fightzone has been absolutely incredible for British boxing over the last six months, putting on some tremendous shows for the fans, and helping to develop the careers of some of the UK’s best young talent.

“The plans in place for next year are extremely ambitious. Fightzone has already established itself as one of the main broadcasters on the British and international scene, and the projections for 2022 are eye-opening.”

One of the Fightzone founders – alongside Steve Crump and others – promoter and manager Dennis Hobson is one of the most influential men in British boxing and has been involved in the careers of many world champions, including Ricky Hatton, David Haye, Clinton Woods and Jamie McDonnell.

Hobson stated “I’ve known Asif for many years. We’ve worked together on many occasions and he’s a fantastic ally to have onboard. His experience in boxing, and big fights, is second to none, and we work really well together as a team.

“Fightzone has had an amazing launch, what has been achieved over the last six months is astounding, particularly as we’ve been operating within the constraints of a pandemic. Asif is somebody who gets things done and with our plans for next year taking shape, 2022 will see Fightzone strengthening its position within the boxing broadcast market.”