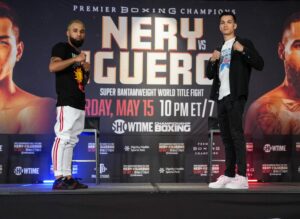 With a good amount of journalists in attendance and under the promotion of Premier Boxing Champions, the conference for the fight that will also have Nery’s WBC belt at stake took place.

Although the champion Figueroa is American, he has Mexican roots so the fight will be another episode between two excellent representatives of the Aztec country.

“I know Luis is coming to fight, I don’t overlook any opponent. I will put the pressure on and take advantage of my advantages. I respect him as a boxer, but on the weekend we will see his stamina”, said the 24-year-old champion, who is nicknamed “The Heartbreaker”.

For his part, Nery, who fought in bantamweight and is now 122-pound champion, knows he is in for a great fight with good action but hopes to come out victorious and win the black and gold belt.

“Brandon and I are both strong punchers, it’s going to be a great fight and I’m sure that despite the other fights and boxing cards, people will be talking about this one for the rest of the year,” said the 26-year-old southpaw guard fighter.

Now all that remains is the weigh-in ceremony for the fighters to step into the ring on Saturday night. Both boxers are undefeated, in the case of Figueroa, he has 21 wins, 1 draw, and 16 KOs. “Pantera”, on the other hand, has 31 wins, 24 of them by KO.