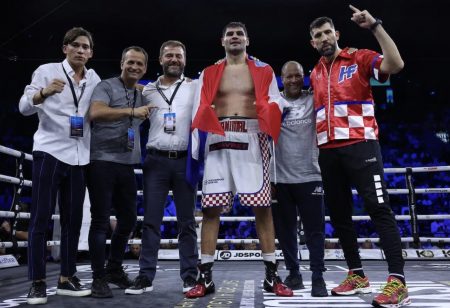 The Croatian Heavyweight star Filip Hrgovic (15-0, 12 KOs) had to dig deep and answer plenty of questions as he ended the undefeated record of Zhilei Zhang (24-1-1, 19 KOs) to become mandatory challenger for the IBF World Heavyweight Title.

It was ‘El Animal’ who started off brightly from the first bell, looking sharp as he threw out varied jabs to the head and body of Zhang. Hrgovic comfortably in the driving seat until his opponent showcased the power he had become renowned for. There is plenty of debate to argue whether the shot was to the back of the Croatian’s head, but Zhang’s shot forced the start of a ten-count.

Hrgovic continued with purpose following promising moments in the early stages. Continuing to hunt down opportunities to the body and head, with punch combinations in three’s and four’s until an ugly clash of heads in the third round saw blood spill from the top of the Croatians head. After the intervention of the doctor to check the gash, action was resumed with Zhang taking advantage of his slightly jaded opponent to land some shots of his own.

A similar pattern continued, with the undefeated ‘El Animal’ providing the greater output yet always cautious of the power possessed by Zhang. A reminder of such strength in the fifth and sixth rounds as Hrgovic had to reset himself and take control of the fight once again. Round seven highlighted the elite level of Hrgovic’s ability, with scything right-hands complimented by good combinations with either fist.

As the two heavyweights entered the latter stages of the fight, the greatest adversary became the moisture on the canvas, with time being stopped to try and manage the slippery nature of the ring. The end of the ninth dished out another reminder that, for all the activity of Hrgovic, Zhang still possessed a genuine threat as a vicious uppercut had the Croatian happy to hear the bell.

Hrgovic showed his warrior spirit in the championship rounds, as he continued to shake off the blood and fatigue to continue to wear down the exhausted Zhang. For every question asked by Zhang, it was the spirit and output that would see ‘El Animal’ finish on top. A unanimous decision win, with scores of 115-112, 115-112 and 114-113 to secure a shot at heavyweight glory.

Speaking to DAZN post-fight, Hrgovic said, “That was for my father who passed away a few months ago. He was a special man. Yes (he has been on my mind), but my beautiful wife, Marinela, was with me in my training camp in Houston and was able to give me energy.”

“Yes, it was a very close fight, I was losing the fight, but in the later rounds I pushed myself and gave everything. I landed some huge shots, and the last six rounds he was just standing there. The knockdown, I wasn’t hurt at all, I slipped on his feet and lost my balance.

“He surprised me, he’s better than I had thought he was.”