Filip Hrgović Back in Action on September 26th in Denmark 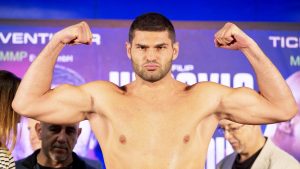 Having been out of the ring since December 7th, Croatia’s heavyweight Filip Hrgović (10-0, 8 KO’s) finally returns on September 26th. In the opposing corner will be Ondrej Pala (33-5, 23 KO’s) and will be held in Denmark.

“I’m looking forward to getting back in the ring. I haven’t boxed in 10 months,” says Hrgović “I need to be active and I need to have fights, so it’s very important for me to fight soon.

“I’m looking forward to fighting in Denmark, I’ve never been there. I’ve fought in a lot of countries around the world but never in Denmark so I’m excited to conquer a new territory.

“If this fight goes well for me, I’ll fight again in the United States so I already have two fights scheduled in two months. If everything goes well there, then I hope to fight again at the end of 2020.

“I think I’m a better fighter and I think I’m the best in the world, but I will take this fight seriously and prepare myself like I’m going to fight for a world championship.”