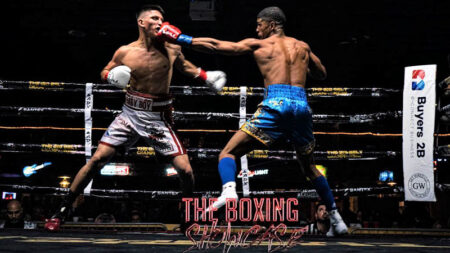 Once again, the Southern Junction facilities experienced a great evening, when the first semi-final of the Big Belt Championship was held, presented by the promoter The Boxing Showcase supported by the WBC.

At 147 pounds, Texan Jake “Snake” Ysasi earned his ticket to the Grand Final by defeating the tough Mexican Avner Hernández by unanimous decision (40-36 of the 3 judges).

In what was a tough and thrilling fight, the Cuban fighter based in Austin, Texas, Yainiel “Machine” Álvarez won his pass to the grand final of 140 pounds by defeating Keven “Baby Boy” Soto from Dallas Texas via split decision.

At 160 pounds, Davelle Smith of Detroit, Michigan, defeated Malik “One Punch” Calhoun of Kansas City, in the third round.

In the same 135-pound division, Omar “Diablito” Urieta of Tyler, Texas, also earned his ticket to the Grand Final by defeating Luis Fernández of Austin, Texas, by TKO in the first round.

Brandon Despain of Haltom, Texas defeated Abraham Flores by unanimous decision to earn his place in the Grand Final at 126 pounds.

In the first contest of the evening, Nigerian Nosa Divine reached his place in the grand final by defeating Giovanni “Peligroso” Loya of El Paso, Texas, by unanimous decision.

Victory for the “Dog” Del Bosque

In what was the main fight of the night and in an out-of-tournament combat, the Mexican American Alexis del Bosque imposed conditions from the opening bell to clearly defeat the Texan Clay Burns by unanimous decision.

With this victory, Del Bosque reached 18 wins, 9 by KO, 5 losses and a draw; while Burns left the ring with a record of 12 losses, 9 wins and 2 draws.