Firuza Sharipova: I will end the year by beating Katie Taylor 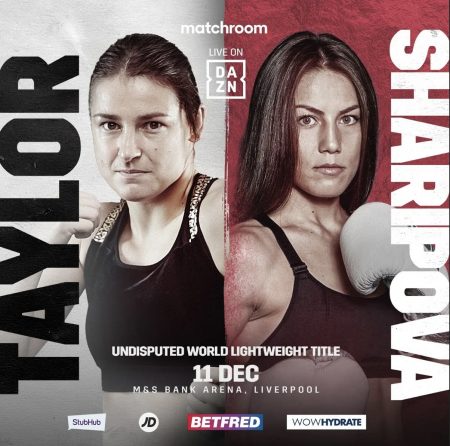 Firuza Sharipova has revealed her secret weapon as she approaches her fight with Undisputed World Lightweight Champion Katie Taylor (19-0, 6 KOs) at the M&S Bank Arena in Liverpool on Saturday December 11, live worldwide on DAZN.

WBA Mandatory Challenger Sharipova (14-1, 8 KOs) is a sizeable underdog for her clash with the Irish legend but the Kazakh will come to Merseyside fully prepared thanks to her training partner – Taylor’s greatest amateur rival, Sofya Ochigava. One of the few fighters to ever defeat Taylor, Russian Ochigava is an amateur boxing legend in her own right and is now making her way in the pros.

Ochigava was edged by Taylor in their tense 2012 Olympic final in London and has always been outspoken in her disagreement with that result. Now on the cusp of a Super-Featherweight title fight, Ochigava has been training with opponent-turned-teammate Sharipova, potentially providing her with the keys to victory.

“Sofya has been in my camp from the very beginning, has passed on all her knowledge to me and has done her best to help me defeat Katie Taylor. I watched their fight in the final of the Olympic Games and I’m sure that the judges helped Taylor. Sofya knocked her down, which wasn’t counted. Sofya was better in the fight, she won it. Taylor is usually not afraid of anyone, but in that final fight, Sophia saw fear in her eyes. Even now, Taylor refuses to fight Sofya.”

Buoyed by recent upset wins on Matchroom cards for George Kambosos Jr, Kiko Martinez, and Alycia Baumgardner, Sharipova notes how, “anything can happen in boxing. In the media, many people call me an underdog. But I will prove that I was underestimated, and on December 11 I will end the year by beating Katie Taylor. I am flying to Liverpool to win the hearts of the whole world and take the belts from Katie Taylor.”