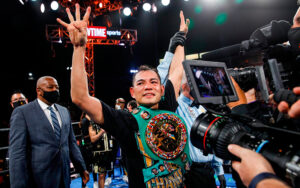 The fight began cautiously with Donaire slipping right jabs from southpaw Oubaali. In the second round we saw a more effective Donaire, countering Oubaali who was trying to get in close. Donaire`s rights were landing flush.

In the third, Oubaali, who was by now pawing with his jab, walked into an eye watering straight right counter. Then a neat well timed left hook to the  side  of his head dropped him.

He bravely got up and was wobbled by another left hook. Trapped on the ropes, he was felled by a hellacious right uppercut just before the bell, which temporarily saved him. Referee Jack Reiss counted, and courageous  Oubaali somehow got up and finally found his corner.

Hardly stirred after he`d more than shaken his opponent, unflappable old pro Donaire, knew full well the end was nigh. But he didn’t rush in where angels fear to tread.  Instead and rather, he artfully drew down the curtain with a crushing left right combination topped with a pinpoint  left uppercut to the point of the jaw,  from which this time there was no escape.

Nonito approached to check the condition of his felled and crumpled opponent, who got up, smiled and sportingly embraced him.

To close this historic evening, the great Jimmy Lennon Jr. announced Nonito Donaire as the new bantamweight world champion of the World Boxing Council, who delivered an emotional speech of appreciation to his team and commented on his desire to become the undisputed champion this year!