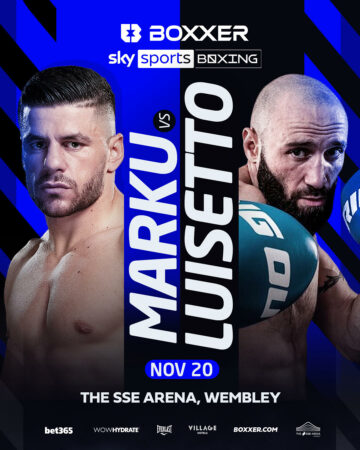 All-action Marku features on the card alongside the next generation of boxing talent, including the exciting pro debut of Team GB Olympian Caroline Dubois and the amazing Azim brothers, Hassan and Adam.

The card is headlined by Richard Riakporhe as he challenges for the WBC Silver Cruiserweight title against Nigerian puncher Olanrewaju Durodola and Dan Azeez’s clash with Hosea Burton for the vacant British Light-Heavyweight Title.

Based in North London, the 29-year-old Marku will be fighting the first 2021 bout of his multi-fight commitment with BOXXER and must deal with Luisetto as he continues on his path towards securing a world title in 2022. He was crowned IBF International Welterweight Champion in September after beating Maxim Prodan in his first fight since a prolonged injury layoff which followed dual hand surgery in February.

Luisetto, from Echirolles in Isère, has won 11 out of his 13 fights and has never been stopped. The KO-hungry Marku, who has halted six out of nine opponents early, will be driven to change that fact when he enters the ring looking for another of his trademark explosive victories.

Marku took to social media earlier today to leave a chilling video message for his opponent.

Also featuring on the card will be Kingston’s former Southern Area Champion Germaine Brown who continues his pursuit of the British Super-Middleweight title and Shepherd’s Bush’s cruiserweight dangerman Mikael Lawal who is within touching distance of his first title.