Floyd Mayweather vs. “Dangerous” Don Moore in Dubai this Saturday 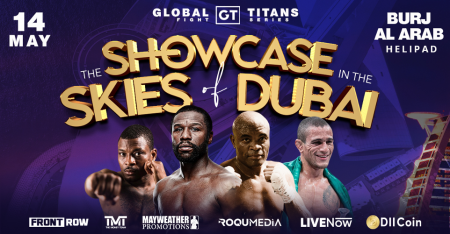 With fight week now underway, legendary Hall of Fame boxer, Floyd “Money” Mayweather, known globally as TBE (The Best Ever), promises a special and unique boxing experience when he returns to the ring this Saturday, May 14 headlining “The Global Titans Fight Series” in an exhibition against unbeaten “Dangerous” Don Moore that serves as the main event of a pay-per-view lineup taking place “in the skies of Dubai” outdoors on the helipad of Dubai’s opulent Burj Al Arab Hotel.

The pay-per-view event, which is presented by FrontRow and Global Titans in association with Mayweather Promotions, will begin at 9:30 p.m. GST (1:30 p.m. ET) and be broadcast live by LIVENow, is available for purchase HERE.

“I promise you’ve never seen a boxing event like this,” said Mayweather, who recently traveled to Nigeria to promote the fight, before landing in Dubai ahead of Saturday’s action. “I’m going to continue to break barriers on May 14. This is a once-in-a-lifetime event and I’m a once-in-a-lifetime fighter. There’s no one else in the sport who could headline an event this over the top. I’m going to give the fans what they paid for.”

While in Nigeria, Mayweather expressed his goal of setting up a boxing academy in the country and met with Rotimi Amaechi, a presidential hopeful there. Upon arriving in Dubai, Mayweather was spotted at The Kamani Club for final workouts ahead of fight night as he met with fighters including two-division world champion Badou Jack, who fights on Saturday’s undercard, and cruiserweight champion Lawrence Okolie.

Prior to leaving the U.S., Mayweather had returned to his hallowed stomping grounds from throughout much of his record-breaking career, The Mayweather Boxing Club in Las Vegas. Still attracting a strong crowd during his legendary workout sessions, the latest addition to Mayweather’s training entourage was his two-year-old grandson, K.J., who brought Mayweather new joy amongst another camp.

“It was business as usual,” said Mayweather. “It always feels good to be in the ring and around familiar faces in the boxing gym. I’ve spent so much of my life in the gym, so I always feel comfortable getting back into it. Training for any fight, and even this exhibition, is something I am always going to do. No one ever saw me take a day off during my career. Why would I start now?”

A five-division world champion who racked up 12 world titles on his way to an iconic 50-0 record, Mayweather has continued to deliver entertainment for fight fans even in retirement. In addition to his work as the President of Mayweather Promotions, Mayweather has taken part in blockbuster exhibition matchups, traveling to Japan to fight kickboxer Tenshin Nasukawa in 2018, before a 2021 showdown that broke the internet against social media star Logan Paul in Miami.

“I love displaying my talents for the whole world and doing something new that interests me,” said Mayweather. “Boxing is entertainment, and that’s what I’m all about. I worked hard to accomplish more than anyone during my career, and now I’m going to enjoy the fruits of my labor, while still giving fans something exciting to watch.”

Considered the UAE’s most iconic hotel and a global icon of Arabian luxury, the Burj Al Arab Hotel will make a perfect host for a fighter known for his luxurious lifestyle and larger than life events. A preview of the one-of-a-kind ring set up can be viewed HERE, as Mayweather will headline the first boxing card at the internationally renowned venue.

“They always say the sky is the limit, well I feel like I’m pushing the limit in the entertainment world once again, going up and literally fighting in the sky,” said Mayweather. “These are the kind of opportunities that I’m always going to jump at.”

This Saturday night, Mayweather faces an opponent in Don Moore who he’s sparred with numerous times throughout his career. In addition, Moore was trained by the late great Roger Mayweather, Floyd’s uncle, and stated during the announcement press conference for this fight that he believes this familiarity with Floyd will give him an edge when they square off.

“I’ve known Don for a long time and I know that he’s a very smart fighter who I can’t take lightly,” said Mayweather. “I believe that he’s coming to prove something in this fight. On top of this fight being at a one-of-a-kind venue, you’re going to see a guy coming in to take his shot at The Best Ever.”

Global Titans Fight Series is the first in a series of six special boxing and MMA events which will be staged at iconic locations across four continents. Each main event is broadcast globally, featuring champion fighters and NFT tickets. Fans can collect and trade their prestigious NFT from all future Global Titans Fight Series events. Tickets, NFTs and further Global Titans Event Series info can be found at www.Global-Titans.com. LIVENow, the premium destination for the best live sport, music and lifestyle content, is the official media partner and will livestream the event as well as partner with other broadcasters in selected countries.

In another history-making special feature of the event, all tickets for “The Global Titans Fight Series” will be sold as NFTs (platform to be announced). Those who secure an NFT ticket will be treated to unique and collectible features, including exclusive official fight videos, photography from the iconic event, a special 3D VIP ticket, plus lots more.