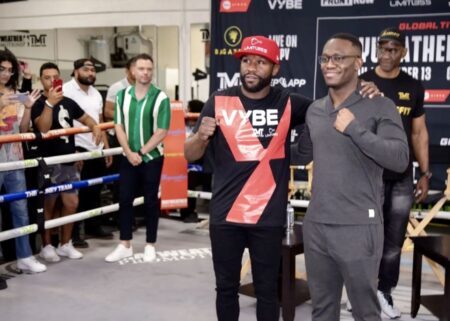 Undefeated all-time great boxing superstar Floyd “Money” Mayweather and UK-based YouTube sensation turned pro-boxer Deji Olantunji went face to face for the first time this past Thursday at a press conference in Las Vegas before they headline the latest installment of the Global Titans Fight Series on Sunday, November 13 from the Coca-Cola Arena in Dubai and live on pay-per-view.

IMPORTANT PPV INFO: Global Titans: Mayweather v Deji will be distributed by Integrated Sports across North America live on Cable and Satellite Pay Per View via iN Demand, DIRECTV, DISH, Shaw PPV, Rogers, Bell TV, and SaskTel priced at $34.95. Additionally, it will be broadcast via Digital PPV on PPV.com, FITE and DAZN PPV.

The event is presented by world-class boxing and entertainment company Global Titans, along with co-owners/partners FrontRow Entertainment and Mayweather Promotions. Tickets for the live event are on sale now and can be purchased at https://www.coca-cola-arena.com/en/events/Global-Titans.

Here is what the press conference participants had to say last Thursday from Mayweather Boxing Club in Las Vegas:

“I’m just glad that we’re able to come together and put another great event together for the fans. I’ve been here so many times as far as doing big fights, and it’s all about entertainment. That’s what you’re getting on November 13.

“I’m happy to be back in the UAE to give people excitement. We’re both going to have fun and all of the people in the world are going to be entertained.

“I like his confidence and I like that after his first fight, he didn’t give up. He kept working hard to get better and improve.”

“This is amazing. I’m truly blessed. This is surreal. We’re making history. I don’t really have the words to properly explain how I feel.

“At the end of the day, I’m here to have fun and showcase my skills. We’ll see what happens in the ring on November 13.

“I always want to encourage people to never give up. I was a guy who people always doubted. But I made sure that I worked hard and carried on, because I’m never going to give up.

“I want to show Floyd that I’m really bringing something to the table with this fight.”

“We came up with Global Titans because I wanted to go global with big fight events and support the youth in this sport in Africa and all around the world. Floyd is very much interested in giving back to his fans and that helped make the idea come together.”

“It takes a lot to get to where we are today. November 13, something huge is going to be born. It’s the start of many big things. We couldn’t be luckier to have the champ, Floyd Mayweather, headlining that fight.”