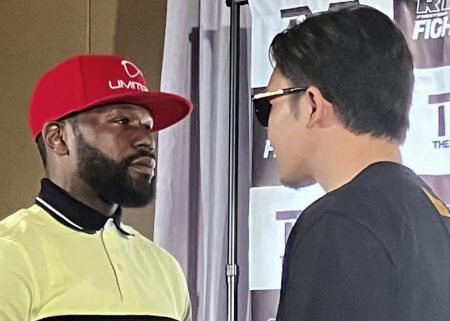 Boxing legend Floyd “Money” Mayweather and RIZIN held a press conference in Las Vegas on Monday night to officially announce the Hall of Fame boxer’s next bout, which will take place in an exhibition against a Japanese star and two-weight MMA champion Mikuru Asakura this September on RIZIN in Japan.

Fresh off of his induction into the International Boxing Hall of Fame this past weekend, Mayweather previewed his return to Japan on Monday alongside RIZIN CEO Nobuyuki Sakakibara and Asakura. Mayweather previously fought in Japan on New Year’s Eve 2018 in an exhibition against kickboxing star Tenshin Nasukawa.

Additional information regarding the September event will be announced later this month. Here is what the press conference participants had to say Monday from M Resort Spa & Casino in Las Vegas:

“I had so many great days competing at the highest level, but this is a great feeling now to be able to travel the world and do these exhibition bouts and have fun. My legacy is already engraved in stone. It’s great to be able to entertain people around the world and from all walks of life.

“This guy is going to come out and give his best, like every and any guy. But I’ve seen every style, so my job is just to go out there be me, have fun and do what I do best.

“Come September in Japan, we’re going to give the people what they want to see. They want to see me still competing and be entertained by Floyd Mayweather.

“I know that he believes in his skill, but no fighter that he’s ever been in the ring with is Floyd Mayweather. These other guys are just fighters, but I’m Floyd Mayweather. I’m on a different level. I’m special. Not just special, very special.

“I don’t have to watch tape on my opponents, he needs to watch me. I’m the one to watch. Everybody I face is just an opponent. It’s no different from facing Manny Pacquiao or Canelo Alvarez.”

“I’m an MMA fighter, but I’m going to use this opportunity and use Mayweather to raise my name and value internationally. I will win this fight.”

“I’m very happy to be sitting between these two athletes and announcing our second fight with Floyd Mayweather on RIZIN and against Mikuru Asakura. Mayweather was supposed to fight in Japan before the pandemic, but unfortunately, it was postponed and now RIZIN is thrilled to put on this fight in September.

“I’m very excited to be working with Floyd Mayweather, not only for this fight but in the future and in the bigger picture to create more exciting content on our platform.”