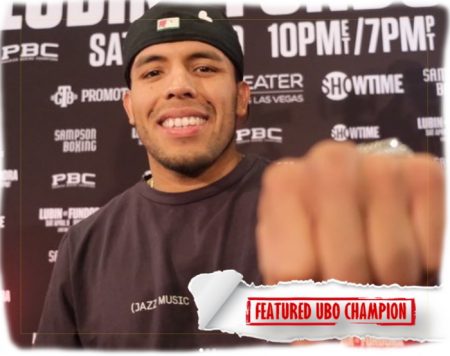 When you have regularly been chosen to spar with the likes of living legend Manny Pacquiao and current WBA, IBF, WBO World Lightweight Champion George Kambosos Jr., you are undoubtedly a very good fighter!

And that is the case with current Universal Boxing Organization™ (UBO) Inter-Continental and South America Welterweight titlist Arnold Gonzalez (9-0, 5 KOs) from New York.

Trained by one of the sports best up-and-coming trainers, Julian Chua, Gonzalez has Ecuadorian parents, and, while he has never lived there permanently, he has so far boxed in his second home-country four times as a professional.

Three times he has been featured on massive shows staged by Premiere Boxing Champions (PBC) at the Barclays Center in Brooklyn, New York, and on May 28 he will return to this venue when he is a part of the undercard for Gervonta Davis vs. Rolando Romero.

27-year-old Gonzalez won his two UBO titles in one fight, when he dispatched of game but out-gunned Colombian Jose Luis Prieto inside five rounds last November in Manta, Ecuador.

Since then he has been waiting for his next opportunity, and on May 28, against an opponent to be announced, he will return on a great platform to showcase once again that he is a man to look out for in one of the sports most talent-rich divisions.