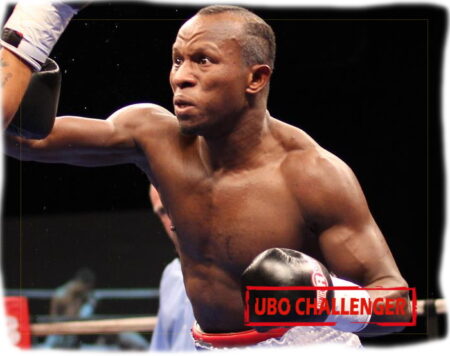 Osiobe likely had unrecorded pro fights in Nigeria, but if we go by his boxrec ledger he only boxed outside his birth-country.

His first recorded fight was in Swaziland in March of 2000 against Kenyan Michael Muya (5-0), who went on to win Commonwealth and UBO Inter-Continental titles. Osiobe won on points.

Later in 2003 he travelled to Denmark, where he scored a draw against prospect Jadgar Abdulla (7-0). In the rematch Osiobe was awarded a TKO injury victory, which was later overturned to a technical draw.

Three months on he drew with another Danish prospect, Martin Kristjansen (10-0), and despite not winning any of those four bouts in Denmark, he had made a name for himself in Scandinavia.

Unfortunately three years of inactivity followed before Osiobe returned with a draw against Swedish-based Ugandan Olympian Sam Rukundo (9-0). He then scored two routine victories, setting up a Rukundo rematch with the vacant UBO World Super Lightweight title on the line.

Rukundo was the better man in the second go-around, and won a deserved unanimous decision. Osiobe rebounded with three low-profile wins in Denmark, before relocating to Las Vegas in 2012.

Osiobe is one of those boxers who, had he had the right backing early on, he could have achieved much more. A very talented and tough competitor, he retired with a 14-10-4 (6) record in 2014.

Round 12: A tribute to women’s boxing by Mauricio Sulaimán 8-0 Junior “La Joya” Cruzat returns in Chille on December 4