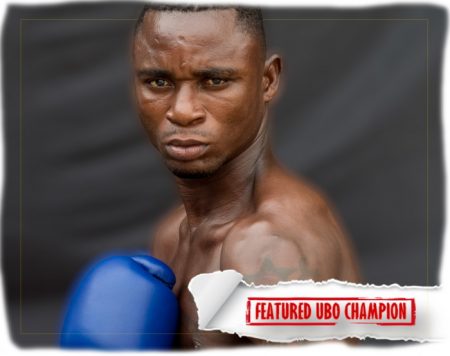 Amazingly he had eight fights in the last four months of 2013, and won the Ghanaian national Lightweight title in the last of those, sharing a bill with future World Lightweight Champion Richard Commey.

He would not be as active in the years to come, and never defended the national Lightweight crown, but in October of 2016, after six more wins, he won the Ghanaian Super Lightweight title with a wide unanimous decision over Abdul Aziz Quarter (13-2).

He lost some momentum when he was not able to secure a fight in 2019, and only managed to get in the ring once in 2020, defeating Mouibi Serouna (20-14) by second round stoppage.

2021 was better for Quaye, as he registered another second round victory in March, over journeyman Kofi Ansah Raymond (8-34), and then won the UBO International title in the first round against Nathaniel Nukpe (13-7-1).

At 29 years of age, and undefeated in twenty fights, Robert Quaye is definitely ready to fight for a world championship. He has proved his capabilities, and deserves a shot at becoming world champion.