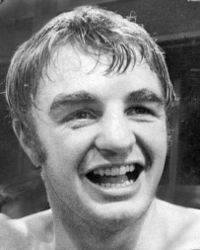 Former British and Commonwealth heavyweight Champion Danny McAlinden, who defeated Muhammad Ali`s younger brother Rahman on the undercard of Fight of the Century, has died on its fiftieth anniversary.
On that fabled night he defeated Rahman on points over six rounds. Danny, born in Newry was the first Irishman to win the British and Commonwealth heavyweight titles. He achieved this by stopping Jack Bodell in two rounds at the Aston  Villa Soccer ground.
Danny retired in 1981, after fashioning a career of 31-12, including 28 KO`s and two draws.
How ironic he passes away aged 73, to join Ali and Joe on the fiftieth anniversary to the day of the epic he shared with them.
Rest In Peace Dear Danny.