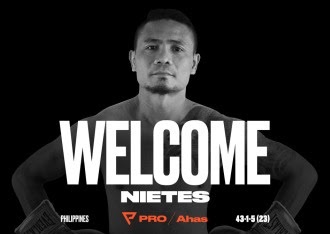 The Filipino icon has had a tremendous career, with Nietes (43-1-5, 23 knockouts) holding world titles at super-flyweight, flyweight, light-flyweight and minimumweight.

Winning world titles in four different weight divisions is a staggering achievement that very few boxers in history have been able to accomplish, making Nietes one of the most decorated boxers in recent memory.

Nietes made his long-awaited return to the ring earlier this year, coming back from a near two-and-a-half year absence when he defeated Pablo Carrillo in Dubai, winning the vacant WBO International super-flyweight title in the process, and displaying the elite skills that have put him at the top of the sport for nearly two decades.

He now joins forces with Probellum, as he looks to once again become world champion and continue to do his country of the Philippines proud.

Probellum has also secured co-promotional agreements with some of the leading promoters in the sport, having partnered with Wasserman Boxing, Universum in Germany, Groupe Yvon Michel in Canada, Maravillabox Promotions in Spain, Kynoch Boxing in Scotland, LNK Boxing in Latvia, Glozier Boxing in New Zealand, Shuan Boxing Promotions in the Dominican Republic, Bufalo Boxing in Nicaragua, Team Ellis Boxing in Australia, Armin Tan Promotions in Indonesia, and Box Office Sports in Ghana.

“It’s such a great pleasure to get this promotional contract with Probellum,” said Nietes. “I am so proud to be part of it, and I am looking forward to fighting again soon so that I can continue to show my boxing abilities and technique.”

“We’re pleased to welcome such an illustrious boxer like Donnie Nietes to the team,” said Richard Schaefer, President of Probellum. “We have seen the lower weight classes finally receive the praise they deserve in recent years, and Donnie is a key part of that stacked super-flyweight division.

“He has already won world titles in four divisions, making him a true legend of the sport, and we’re proud to now be working together as we look to help him claim world honors again in the near future.”