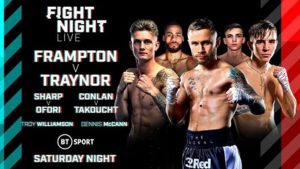 “Obviously, I have been talking about fighting the (Carl) Framptons and the Shakur Stevensons and the Oscar Valdezs, but on that performance that would be a loss,” Sharp said. “I’m still learning. That was a very tough opponent. There is no excuse. I have to go back and watch that and see why I wasn’t doing what I was doing in the gym.

“I wasn’t getting to my jabs today. There were a few things a bit wrong. I’m still learning and still winning. I didn’t have a great night but I picked a win up.”

“I don’t have a clue,” Conlan said when asked about his world-title prospects. “I just have the best team and leave it in their hands. If they (Fulton and Leo) have to fight each other, so be it, if, it’s St Paddy’s Day, so be it. I don’t care. But I know next time when I fight for the world title at 122, which I will do, I will be world champion, whether it is Fulton or it is Leo.

“It will be a completely different fight. Fighting an opponent like that (Takoucht) is almost harder, because he was so jittery and novicey and unorthodox. Because he is a southpaw he does some crazy sh-t.”

“I didn’t mean to hit him low,” Conlan said. “I just love to hit them on the sweet spot and there is a fine line. It was hard to adjust mid-fight because some of them I don’t think were low, they just swayed low – a lot of them must have swayed low. I’m experienced enough in the fight game to know I can just go to the head.”

“If I had the chance to take him out in the first round, I would have done it, but saying that, the rounds were good.

“I had to make sure complacency didn’t creep in at all. It was a potential banana skin. No one is expecting Darren to win. There was no pressure on him and he had a decent game plan, he was trying to step back and not rush things. But once I started landing my jab, and I hurt him a few times with the jab and then the body shots.”

“It was a better opponent for Herring than the original opponent, because he was about my height or a little bit shorter,” Frampton said. “Darren isn’t a southpaw but the dimensions are similar. But I know I need to be a lot better for Herring. It was good to get the rounds done and my hands are fine. Onwards and upwards.”

“It was a bit surreal, but once you are in there and another guy is throwing punches at your head, you soon switch on,” he said referring to no audience.