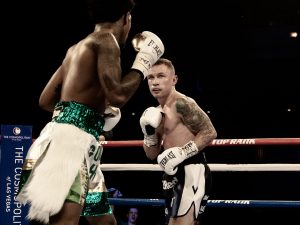 As long as no banana skins come along and upset the future plans that are being made for Carl Frampton (27-2, 15 KO’s) and Jamel Herring (21-2, 10 KO’s), and these skins have a tendency to come along in the sport of boxing, the two are headed once again on a collision course for September according to promoter Bob Arum.

“Jamel Herring will be defending his title versus Oquendo. Finally, he will get that off after it was twice postponements because of this coronavirus,” Bob Arum of Top Rank stated during a recent media Zoom conference call. “That fight will happen September 5. If Jamel is successful and if Carl is successful on Saturday, I have a date picked out in November where they will fight for the title.

Before this clash can happen, the two fighters are pitted against fighters they are expected to beat, Frampton with late substitute Darren Traynor (16-3, 7 KO’s) from the BT Sport Studio in East London (Saturday) and three weeks later with Herring facing (the 3rd attempt) Jonathan Oquendo (31-6, 19 KO’s). As stated earlier, the two are expected to win with Herring’s assigned viewed as the tougher of the two’s ‘tune-up’ fights.

“That’s done. Everybody is on board.”

Really? The dates seems very close to each other (especially with Herring’s) so expect this projected date not to happen especially if the resistance is harder than expected with either of the two outings.

“The past few years, there have been a fair amount of turmoil,” Frampton said of his career. “Things have been up and down. I haven’t been the luckiest fighter in the world and neither has Jamel.”

“One thing I can’t control is the virus… but we’re going to do that fight in November,” states Arum. “It may very well be another Bubble fight, in other words no fans. We’ll have to get Carl over to the states to do it. As long as these two guys win, you can count on a title fight between Herring and Frampton happening in November.”

The WBO 130lb title would be on the line, just expect all to go to plan just slightly later than is hoped….