Franco vs. Moloney: A trilogy to be completed on August 14 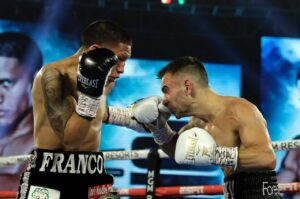 Joshua Franco and Andrew Moloney kicked off the boxing world in the aftermath of the pandemic. When they fought for the World Boxing Association (WBA) Super Flyweight world title on June 23rd, 2020 in Las Vegas, that bout marked the return of the world championships fights after months because of Covid-19.

A little over a year later, their third bout has been confirmed, which will take place in Tulsa, Oklahoma City, next Saturday, August 14th.

To get here they have had to come a long way. In that first fight, Moloney arrived as champion but he met a Franco in a great night, who used his jab in a great way, knew how to read the situations of the fight to win the world title with a close unanimous decision.

In view of the tough fight and the good action, a rematch was called for November 2020. On that occasion, the Nevada technical staff determined that an illegal punch had damaged Franco’s eye, so the bout had to be stopped in the second round and declared a No Decision, when Moloney had the lead.

That is the story that has taken this rivalry to a trilogy. The American Franco is 25 years old and has the clear goal of retaining the title he now holds.

However, the Australian has said on multiple occasions that he intends to regain the belt and at 30 years old he seems to be in the prime of his career to look for a victory that will bring it back to him.

Maestre will make his debut in the USA against Crowley on August 7 On this day: Rocky Graziano and Tony Zale collided for the second time