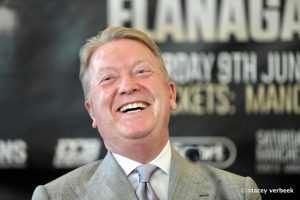 Frank Warren, who was speaking on BT Sport during the telecast of Liam Williams and Andrew Robinson, had plenty to say with much boxing news…

First off, Jack Catterall will accept step-aside money to allow Josh Taylor to fight Jose Ramirez with Catterall to fight the winner.

“The unification will go ahead, subject to the winner fighting Jack, so Jack can fight for all those belts,” Warren said.

“I fancy Josh Taylor to beat Ramirez and, of he does, him and Jack, what a fight that will be in this country.

“Tyson has been training solidly since February and he wants to fight this year,” Warren said. “My concern is Tyson’s welfare, well-being and I will deliver what he wants. So he will fight this year, whatever happens. Contractual commitments are what they are, but contracts don’t go on forever. So if the fight cannot be delivered during the contractual period, Tyson will move on and maybe revisit it another time.

“What matters to me and the people around him is doing what Tyson wants to do.”

Anthony Yarde will face Lyndon Arthur at the Royal Albert Hall on December 5, according to Warren who will celebrate 40 years in the boxing game with this fight card.