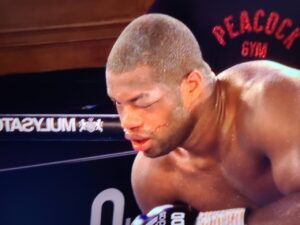 Daniel Dubois took a knee in the tenth-round and has been subsequently called a ‘quitter’ in his bout for the British, Commonwealth and European heavyweight title fight against Joe Joyce on Saturday.

Frank Warren, Dubois’s promoter, was outraged after Eddie Hearn implied that Dubois might not have suffered a fracture, adding “I’m not a doctor, but it looks like eye-swelling to me, not necessarily a fracture.

“Afterwards you have some t— sitting in his office saying we are all lying about it I find that a real personal affront.

“We can all point fingers but it should be about the fighter’s safety. If a boxer has to lose his eyesight to prove a point then I’m afraid anyone who thinks that should not have any part in the sport.

“You have a situation at the weekend where you have two {football} players who have a clash of heads and everyone is saying David Luiz shouldn’t have been allowed to continue or drive home and you have a boxer who is told to fight on with a serious injury,” Warren said. “Why is a boxer different from a footballer? The difference is the footballer does not get hit on the head.

“Maybe it is a wake-up call to all of us for what we expect from our fighters. Daniel didn’t know he had a broken bone, but he said he was getting excruciating pain. With the benefit of hindsight he did the right thing.

“I remember years ago with Vitali Klitschko, he tore his rotator cuff and everyone called him a quitter and a dog. You look at Danny Williams, his shoulder came out of its socket and he wouldn’t let his corner pull him out.

“Boxers are a strange, unique breed. If he had got through the round and one of the remaining two rounds, he would have won the fight and everyone would have said how brave he was. We are in a fickle sporting situation.

“If I had a meeting with him now it would be quite interesting. That’s never going to happen, as we all know. Of course it won’t happen. It’s all bullsh-t. That is gone out of my mind. We have to focus on our fighters. We have a wealth of talent.”

Anthony Joshua: “They Call Him a ‘Quitter’ – Are They Serious?” Billy Joe Saunders: “It’s My Time to Shine Now”