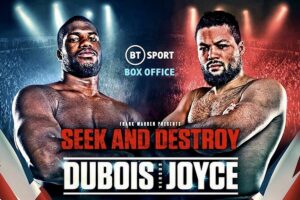 After many speculated dates and delayed/rearranged dates, a date for late November or early December appears to be on the cards for Daniel Dubois vs Joe Joyce.

“Since the government let us know we couldn’t have an audience present in October I’ve worked day and night to ensure this fight still happens.

“It’s the biggest domestic Heavyweight clash in years and it’s testament to the character of both fighters that they are willing to step up and take the fight on even with all the restrictions and obstacles in their way.

“I’m delighted that Queensberry, BT Sport and the fighters were all willing to come together to make this happen and deliver big time for British boxing fans.

“It really is winner-takes-all,” Warren added. “In Daniel, you have a 23-year-old lad who most in world boxing consider to be the hottest young prospect in the Heavyweight division.

“If he can do to Joe Joyce what he’s done to the 15 men that came before him, he’ll be ready to go for a world title in my opinion.

“Joe might be a little older than Daniel, but in my books he’s every bit as exciting a prospect. He has so much more experience than Daniel, as an amateur, that I’d be surprised if he doesn’t go into the fight as many people’s favourite.

“If Joe wins, then he’ll be ready for world titles too.

“Of course I’d like to come out with all the venue and date details ready to go but the reality is, the situation is moving so fast we don’t have everything 100% confirmed.

“But the one thing we do have confirmed is that this fight will happen behind-closed-doors either in late November or early December. That means the event in October is cancelled and all ticket holders should get a refund from their ticket agent.

“This is the most exciting prospective fight in all of boxing right now. So let’s get it on for the fans.”

If indeed it turns out to be December, it looks to be a bumper month with potentially Anthony Joshua vs Kubrat Pulev and Tyson Fury vs Deontay Wilder 3 all in a four week period.