Freddie Roach: It’s all about boxing immortality for Manny Pacquiao 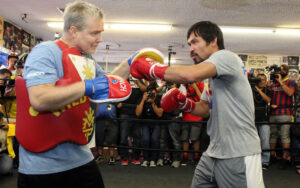 The most iconic boxing duo on the scene again combine to face another epic challenge.

Manny Pacquiao and Freddie Roach are completely focused to face WBC/IBF world champion, Errol Spence, who is trained by the talented Derrick James.

This is what Manny´s legendary trainer commented: “Manny knows it’s a tough fight and probably his toughest – but that’s why he began his conditioning so early in the Philippines.”

That’s also why Pacquiao jumped straight into working with Roach once he arrived in America.

“Usually, jet lag keeps him out of the gym for one day the first week he arrives in Los Angeles,” says Roach.

“Not this time!  He has been here every day, training two and half to three hours each afternoon.  I usually hold off sparring the first week, but Manny insisted on sparring, so we brought in Maurice Lee (5’11) and Alexis Rocha (5’10), who went two rounds each with him.

“Manny has achieved so much in his boxing career and in his life,” says Roach. “But everyone in camp can sense this fight has a very special meaning.  It is not just about beating a top pound-for-pound fighter or winning more titles.”

Joe Joyce out to prove he is No.1 this Saturday Eduardo Nunez vs. Jonathan Aguilar headlines RJJ Boxing show in Mexico