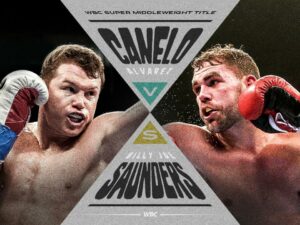 This Saturday, May 8, boxing fans will have the opportunity to see one of the most anticipated fights in recent years, with World Boxing Council and WBA super middleweight champion Saúl “Canelo” Álvarez fighting  undefeated WBO champion Billy Joe Saunders.

“Canelo” Álvarez intends to unify the 168-pound division. On the way,  he will face an undefeated opponent, left-handed, elusive Saunders, who is characterized by getting into the crust of his rivals.

Like all fights on paper, boxing fans and great champions opt for their favorites by analysing styles, records, guards and even considering the partiality  they feel towards some of the contenders.

“I think Billy Joe gives him a boxing lesson,” stated Fury when speaking on Behind The Gloves. “That’s what I’m here to see and that’s what I think will happen. I think everyone raves on about Canelo and how good he is and how he’s such a great guy but I just think every time Billy Joe steps into the pressure cooker he delivers, much like myself.”

Looking forward to the fight at the weekend. It’s hard to call but if pushed I’d go for Canelo by a late stoppage.

So, I think Canelo and Billy Joe are both unique fighters. It’s hard to go against Canelo for anyone. I believe Billy Joe will present some problems with his movement & grit early on, but I think Canelo with his smarts and power will figure Billy Joe out and use his great defense and offense to drop Saunders once or twice to win a unanimous or majority decision. I see the fight going all 12 because I just don’t see any quit in Billy Joe.

Demetrius Andrade: I think it’s a good fight for boxing, but I should be the one fighting Billy Joe and the winner gets to fight Canelo.