“I agreed to December 19. Then they tried to change the date again into next year.” 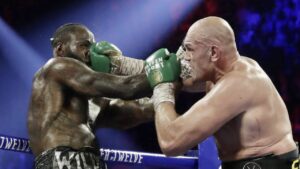 Rumours, hearsay, on, off, not sure, in doubt, postponed…all words that have recently described the Fury vs Wilder 3 bout.

After posting Saturday morning that it maybe off with the supposed ‘expired contract’ rumours, we will try and add some clarity…

Tyson Fury has confirmed that the fight is off.

He told the Athletic: “I was looking forward to smashing Wilder again. A quick and easy fight. But Wilder and his team were messing around with the date. They don’t really want to fight the lineal heavyweight champion.

The Gypsy King claimed the other camp (Wilder) have not confirmed anything, even the postponed December 19th 2020 and he is now free to take on Anthony Joshua next year with the ‘all belts’ unification in 2021.

Shelly Finkel has denied the claims: “They are wrong, we will fight in December” he told Sky Sports.

Bob Arum told talkSPORT: “That’s up to Tyson because if we can’t, as appears to be the case, put on Wilder vs Fury this year, Tyson wants to keep busy and we are going to accommodate him. Then next year, assuming Joshua beats Pulev, we can look forward to a Fury vs Joshua fight.”

Wilder’s team has said there is no “expired contract.”

But with all this said, the WBC has not confirmed this, and they are the ones that will say whether this really is the case or not. They have said they have not been informed by either camp about not wanting it to go ahead (or not).

Frank Warren added: “Contractual commitments are what they are, but contracts do not go on forever, and if the fight cannot be delivered within the contractual period, Tyson will move on and maybe revisit the fight another time.”

And we thought the Fury vs Whyte situation was confusing. Surely contracts do expire if one camp is not, well, saying or doing much.

With December quickly approaching, it looks like time will surely tell and give us the answers.