Fury vs. Wilder 3 on ESPN & FOX Sports on Pay-Per-View on October 9 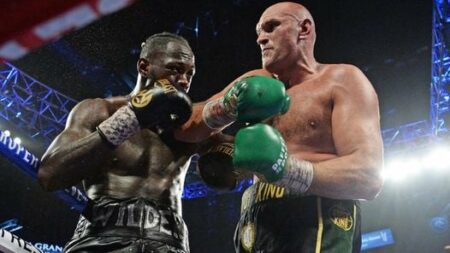 The third match between the two giants – Fury stands 6’9” while Wilder is 6’7” – will conclude one of boxing’s most storied heavyweight trilogies. It follows a controversial draw in December 2018 that saw Fury rise from a pair of knockdowns, and the dramatic February 2020 rematch, where Fury flipped the script and knocked out Wilder in the seventh round.

Before the main event, three other heavyweight bouts will be aired: a battle of unbeatens in Efe “The One and Only” Ajagba versus Frank “The Cuban Flash” Sanchez, a hotly anticipated rematch between Robert “The Nordic Nightmare” Helenius and Adam “Babyface” Kownacki, and rising American superstar Jared “The Real Big Baby” Anderson against fellow unbeaten Vladimir Tereshkin.

ESPN and FOX linear networks will air a variety of pre-fight programming: one-hour reviews of the first two fights, parts two and three of the 30-minute all-access Inside Fury vs. Wilder III and the behind-the-scenes one-hour special Countdown: Fury vs. Wilder III.

Live fight-week coverage will include Wednesday’s press conference at 5 p.m. ET on ESPN2 and FS1, and Friday’s weigh-in at 5 p.m. on ESPN2 and FS2. In addition, Max on Boxing with Max Kellerman will air Friday evening.