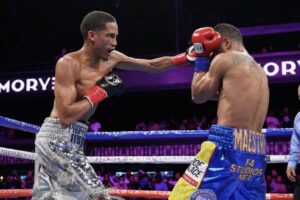 Maestre encountered an extremely difficult opponent in Fox, who took advantage of his height to keep the Venezuelan at a distance. In the second round, he counterattacked with a straight left that sent Maestre to the canvas.

Maestre got up and began to incessantly attack Fox. The fight was developed with the Venezuelan going to the front and Fox walking the ring. Maestre tried to deploy his attack from mid distance and was able to land some good punches, but when he entered close distance, Fox chose to clinch.

Maestre improved his undefeated record to 4 wins, with 3 KOs, while Fox now has 22 wins, 3 losses, and 5 KOs.

Aqib Fiaz defeats Spain’s Kevin Baldospino at Fight Camp in England Sam Maxwell: Delay has been a blessing in disguise