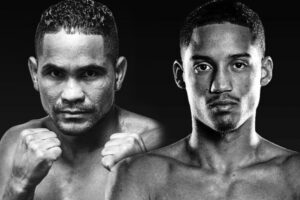 Venezuelan Gabriel Maestre will fight American Mykal Fox for the WBA Interim Welterweight title on August 7th, after it was announced that Cody Crowley tested positive for Covid-19.

Originally, the Canadian Crowley was going to fight Maestre for the vacant belt, but after his impossibility, a new opponent was approved for the main bout of the TBG Promotions and Premier Boxing Champions event in Armory, Minneapolis.

Maestre was one of the favorites in the Welterweight division for the 2020 Tokyo Olympics, but decided not to attend when presented with the opportunity for the black and gold belt in the U.S. The 34-year-old fighter only has three professional fights under his belt, but has faced experienced opponents such as Diego Chaves and Jeovanis Barraza, both of whom he has knocked out despite his record.

Fox comes in as Crowley’s replacement but with a lot of motivation for this opportunity. He has a number of interesting characteristics, especially his height, as he is 1.92 meters tall and 13 centimeters taller than Maestre (1.79 m). He is 25 years old, 9 years younger than Maestre, and is a southpaw fighter who knows how to work long distance and has a very interesting technique.

Fox has been training all these months waiting for an opportunity and the one he was waiting for has appeared. Maestre, on the other hand, has already travelled to the United States to complete the last details of his preparation and face this great fight.

The Venezuelan has three KOs in the same number of fights and Fox has 22 wins, 2 losses, and 2 KOs in his record.