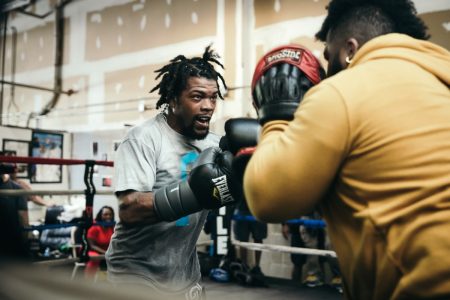 Unbeaten rising star Gary Antuanne Russell held a media workout in his hometown of Capitol Heights, Md. on Monday, as he prepares to take on former two-division world champion Rances Barthelemy in the telecast opener live on SHOWTIME Saturday, July 30 from Barclays Center in Brooklyn in a Premier Boxing Champions event.

Tickets for the live event, which is promoted by TGB Promotions and DSG Promotions, are on sale now and can be purchased through seatgeek.com and barclayscenter.com. Tickets are also available for purchase at the American Express Box Office at Barclays Center.

Russell was joined at his media workout by his older brother and new trainer, former WBC Featherweight World Champion Gary Russell Jr., as they look to build on the legacy left by their late father Gary Sr., the patriarch of one of the sport’s preeminent fighting families.

Here is what the workout participants had to say Monday from The Enigma Boxing Gym:

“I’m up against a fighting style that I believe is similar to Viktor Postol’s. Postol is a little more defensive, but they’re both long and rangy opponents.

“It’s of course a plus that I was able to be the first person to stop Postol. But at our gym and with our family, we don’t magnify fights like these. We pay attention to our credentials, and don’t really worry about what our opponents bring. The way we train, we’re not going to run into styles that we’re not accustomed to.

“With this sport, you have to have diversity in your style. Because you never really know what kind of opponent you’re going to be facing. They might change up their fighting style based on yours. We just strive for excellence and execution.

“In the Postol fight he tried to use his length to keep me at bay. But we executed our game plan. It wasn’t about overanalyzing our opponent, but we saw that we could exploit his flaws. He pulled back a lot and he didn’t want to fight on the inside. We tried to keep ourselves in comfortable positions.

“We train for perfection every day. We know that execution is what wins fights. If our opponent can’t make the necessary adjustments to keep us off them, then that’s on them. This sport is a battle of wits. My will versus your will and my intelligence versus yours.

“My brothers have always been in my corner. We all now are so tunnel-visioned on what’s important. Our motto in the gym is that the ultimate revenge is success.

“If we come out unscathed from July 30, we’ll start working on the next opponent and get another fighter with great credentials in there. We’ll be looking at fighting for the titles. Our goal was to clean out the division. That’s the first goal, then we’ll start moving up to other weight classes eventually.”

“Our father was not just a magnificent father, but a teacher and a mentor. He molded not just men, but soldiers. He gave us the tools, the skills and the wit to properly maneuver through this jungle that we’re in.

“The biggest thing that our father taught us was versatility. That’s the biggest key with anything you do in life. I’m a great fighter because I’m versatile. A lot of these fighters are just really good at one thing. I don’t want to see someone who’s only good at fighting one style.

“I was always side-by-side working with my father when it came to working with my younger brothers. Even before I was going to fight, if they were on my undercard, I would work their corners as well. I think my father was somewhat always preparing me for this.

“Rances is a great opponent. Whoever wins this fight is getting a big leg up in their career. My brother is looking to take over the division. I don’t think there’s any fighter in the division who he couldn’t beat. He can run through these guys. All he has to do is listen, that’s it.

“Your corner is your last line of defense. As a fellow fighter, I understand that. My brother is still learning to adjust on the fly. He’s learning, but there’s still things left to tweak.

“My father touched so many people in the sport of boxing and played some role in where so many people have gotten in their careers. Whether it’s fighters or coaches, he was never shy about passing along jewels and information.”