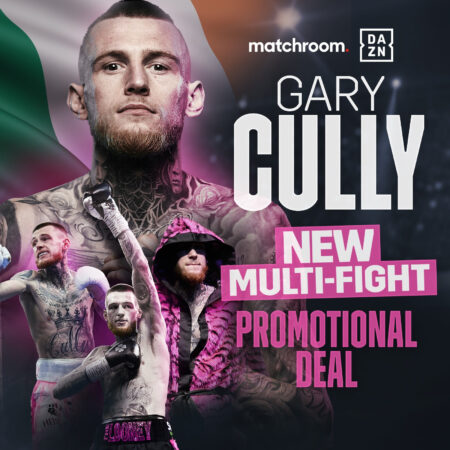 Irish Lightweight star Gary Cully has signed a multi-fight extension with Eddie Hearn’s Matchroom Boxing as he continues to work towards a World Title opportunity in the 135lbs division.

The 26-year-old from Naas kicked off a memorable 2022 by earning an impressive fifth-round stoppage win over Mexico’s former IBF Lightweight World Champion Miguel Vazquez on the undercard of Leigh Wood’s brilliant World Title win over Mick Conlan at the Motorpoint Arena Nottingham in March.

‘The Diva’, who fights out of the Colosseum Gym and Unit 3 Fitness under the guidance of trainers Pete Taylor and Niall Barrett, then put pen to paper on a promotional deal with Matchroom in August before claiming a stunning first-round knockout win over Jaouad Belmehdi at Wembley’s OVO Arena in October.

“I’m delighted to sign a new deal and pledge my long-term future with Matchroom,” said Cully. “I’m only one fight into my first deal so for Matchroom to come to me so soon after initially signing with them and offer me a new deal shows the belief that they have in me. I’ve always believed that Matchroom are the best promotional company in boxing, and I’ve always seen myself and my career being aligned with Matchroom. To get this deal across the line is massive for me. As soon as we sat down and talked about the plans for the future it was a no brainer for me.

“2022 was massive for me, the biggest year of my career so far. To get the opportunity to fight Miguel Vazquez on the big Wood vs. Conlan card back in March and to beat him in the fashion that I did was a massive statement. I kicked on from there and signed with Matchroom at the start of August which was a massive step forward in my career. It was a huge step for me and something that I’d been working towards for a long time. To get my official Matchroom debut against Jaouad Belmehdi on a big Katie Taylor undercard and to get a first round knockout in 35 seconds was great statement. Two big wins and two big knockouts set me up perfectly for a massive 2023.

“2023 I believe is the year where I really become a star and become a name in world boxing. I want to fight early in the year and get some ring time and get active. A big aim of mine this year is to fight at Croke Park back in my home on the undercard of the big Katie Taylor rematch with Amanda Serrano. Hopefully all going well that gets over the line and I’ll be in a position for a big fight on that card. I hope to be co-headlining on Katie’s show in a big fight against a Jorge Linares or another big name in the division. Moving on later into the year I’d like to return to Dublin and headline my own show. I want to become a force and a name back in my home at the 3Arena. Lots of big plans in 2023, lots of exciting times ahead and lots of big nights.”

“Gary Cully enjoyed a Matchroom debut to remember and certainly caught the attention of the Lightweight division with an explosive first round knockout back in October,” said Matchroom Sport Chairman Eddie Hearn. “I was so impressed with that performance that I wanted to extend this deal further so we can get some solid plans in place to see Gary become a World Champion at 135lbs. He talks the talk and can clearly walk the walk and I believe that ‘The Diva’ is going to have an even bigger 2023. I have full belief that if Gary fulfils his potential he can become the next star of Irish Boxing.”