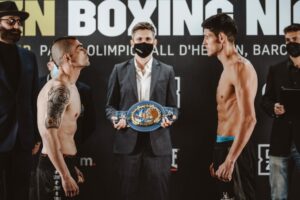 Gavin McDonnell looked ripped and ready on the scales as he weighed in for his European featherweight title showdown with Andoni Gago on Friday.

The two men weighed in on Friday, with McDonnell looking in superb shape as he bids to become a two-weight European champion. He tipped the scales at 56.65kg (124.89lbs), while Gago was slightly heavier at 56.85kg (125.33lbs).

Bilbao’s Gago won the belt in his home city back in June 2019, but now faces a tough test against the Doncaster fighter.