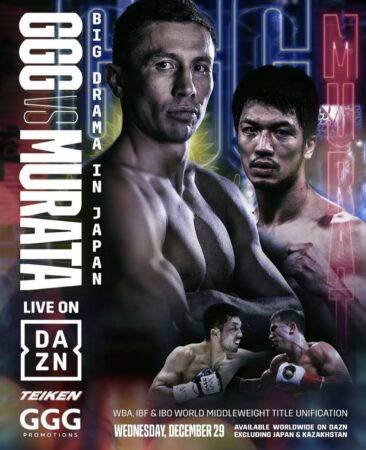 The World Boxing Association (WBA) Super Middleweight Champion, Ryota Murata from Japan, will step into the ring to unify his belt with the IBF champion, Gennady Golovkin from Kazakhstan, in a great boxing night on December 29, at the Super Arena, in Saitama, Japan.

The fight is ideal for the end of the year and generates a lot of expectation as it pits two fighters with great punching power who are eager to unify their crowns.

Murata will have the advantage of being at home and coming in on a good streak. In October 2018 he lost to Robert Brant in an unexpected result during his first fight held in the United States. However, the 35-year-old Japanese was able to vindicate himself and beat the American in the rematch in July 2019 to regain the WBA crown, which he subsequently defended against Steven Butler in December last year.

The quality of Murata’s opponent is no a secret. Golovkin has been one of the most media-worthy fighters in recent years and is one of the most powerful men boxing has ever seen. “GGG” is 39 years old but is an IBF world champion and has won three fights in a row since losing in a close majority decision to Saul Alvarez in 2018.

The fight is being promoted by Matchroom Boxing, Teiken Promotions and the inclusion of Amazon Prime in the broadcast. Murata comes in with 16 wins, 2 losses and 13 knockouts, while Golovkin has 41 wins, 1 setback, 1 draw and 36 knockouts.

Gennadiy Golovkin: “I am really excited to be bringing the Big Drama Show to Japan, a country where boxing is very popular. Ryōta Murata has been an outstanding champion. It is going to be a special night when we meet in the ring to unify our titles. We are going to give the fans a great fight.”

Ryōta Murata: “I feel that my entire amateur and professional boxing career has been a preparation for this fight against Gennadiy Golovkin. This fight will determine my place in the middleweight division and boxing history…to me, he is still undefeated.”