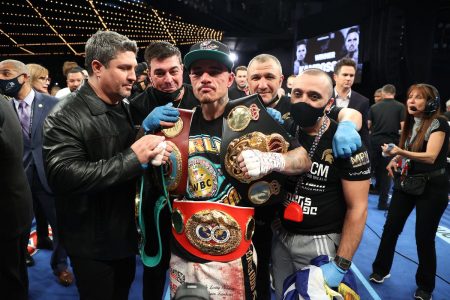 Tank Davis and Ryan Garcia may have more Instagram followers than George Kambosos Jr. … but when it comes to boxing skills, the newly crowned champ’s adamant there ain’t a 135 lb. fighter in the world who’s better in the ring.

“Yes, by far. I got all the belts. I’m #1, and I took out the guy who took out the guy, so I’m the top dog in the division. And, they’re all hunting me now, which is great cause it shows I am the guy now,” the 28-year-old boxing star told TMZ Sports when asked if he was the best lightweight in the world.

FYI, the 135 pound division is STACKED … with killers like Vasiliy Lomachenko and Devin Haney competing in the weight class, in addition to Gervonta, Garcia and a bunch of other tough fighters.

Speaking of the judges’ decision … Teo’s dad is adamant his son actually won the fight, a sentiment George says is “delusional.”

“That’s just delusional. He’s probably the only guy in the world that’s saying that right now,” Kambosos told us, adding, “The world saw the fight. Everybody saw the fight. His own people in New York were booing him and were applauding me.”

“Whatever they wanna say. Whatever delusional stories they want to have, that’s fine. There’s no disrespect there and I am the champion of the world.”

We also talked to George about a possible rematch with Lopez, and who he’s got his sights set on now that he’s the lightweight king.