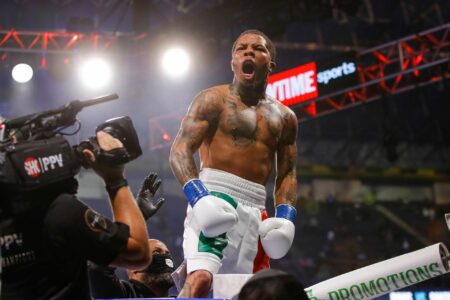 The world boxing schedule will add another great fight for the last month of the year with the confirmation of the fight between World Boxing Association (WBA) lightweight champion Gervonta Davis and Rolando Romero on December 5 at the Staples Center in Los Angeles, California.

“Tank” is one of the most talented young fighters in the sport and it is always a treat for the fans to watch his fights. The 27-year-old American is coming off an authoritative win over Mario Barrios in super lightweight last June, proving that his power can also be felt in that division.

Now he will return to 135 pounds to make the second defense of his black and gold title, which he won in December 2019 when he defeated veteran Yuriorkis Gamboa in Atlanta. The southpaw retained that belt in October last year with a resounding knockout over Leo Santa Cruz in San Antonio.

This December’s fight has caught the attention of fans because Rolando Romero is a gritty, young and undefeated opponent who wants to get Davis in trouble. “Rolly,” 26, has earned the opportunity because he was interim WBA champion prior to the resolutions because of the world championship reduction plan. He is number one in the rankings and therefore will battle for the world title.

The event will be organized by TGB Promotions and broadcast by Showtime on PPV. Gervonta has 25 wins, is undefeated and has knocked out 24 of his opponents. Romero is also undefeated in 14 fights, with 12 of those wins coming by knockout.

Hannah Rankin vs. Maria Lindberg on November 5- now for two world titles Eddy Reynoso predicts Canelo vs. Plant will be a classic on November 6