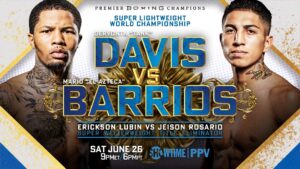 Fight Notes: The size difference between the two was huge, with no re-hydration clause after the weigh-in.

Round 1: The opening round was a feeling out round for both with Tank smiling.

Round 2: Barrios very disciplined, fighting tall and using his height and reach advantage to good effect.

Round 3: The feeling out process is now out of the way with both now unloading. Barrios takes the round but with Davis starting to threaten.

Round 4: Barrios still fighting a disciplined fight but Davis now showing his advantage in speed when he attacks.

Round 5: Now its a fight! Davis now closing the distance with both fighters throwing more with both landing. Davis is now the aggressor.

Round 6: Davis now cutting off the ring, but still with both landing. Davis now is showing why he is the 3-1 favourite as he is on the front foot with his advantage in speed starting to be a factor.

Round 7: Barrios started the 7th well, trapping Davis in the corner and unloading. After a breather, Davis went back on the offensive by the end of the round. If this goes the distance, the scoring will be interesting?

Round 8: Well, the fight takes a huge turn. Davis has Barrios down twice in the round and now with Berrios’s face a mess. The first knockdown by a temple shot, the second a left to the jaw.

Round 9: Barrios surprisingly back in the fight and maybe even taking the round as Davis takes a breather. Floyd Mayweather from outside the ring saying to Davis he is down on points, unofficially?

Round 10: What a fight! Barrios showing real guts, targeting Davis’s body. In a measured manor, Davis is head hunting.

Round 11: Barrios down from a body shot and with a follow up attack, the referee waves off the bout with Barrios hurt.

Time of the referees stoppage was 2:13 of the 11th round. Davis is now a three weight champion.

Fight Notes: Lubin hit Rosario after the bell had sounded to mark the end of the round in which Rosario was left staggering. He recovered. Rosario was knocked down twice in round 6, the second time the referee waving it off as the count reached ten.

Time of the knockout stoppage was 1:42 of the 6th round.

Fight Notes: Adames was deducted two points for hitting and holding. In the same round, Adames decked Salazar from a huge left hook to the jaw. Salazar was staggering once he rose and the referee waved off the bout.

Time of the referees stoppage was 2:50 of round 3.

Fight Notes: Akhmedov was cut in the 2nd round from a clash of heads. The bout was stopped in-between round 8 and 9 due to an injured hand and was declared a technical knockout victory in the 8th round for Akhmedov.