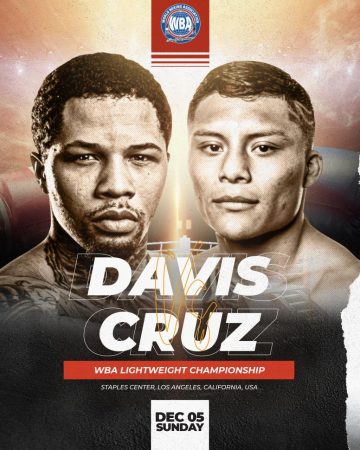 Gervonta Davis and Isaac Cruz will meet on Sunday, December 5 for the World Boxing Association (WBA) lightweight title at the Staples Center in Los Angeles, California.

“Tank” will return to the ring to defend his 135 lbs. crown against the Mexican in a bout that promises a lot of action and excitement due to both fighters’ styles and the records.

Davis is one of the most impressive fighters in the world and at 26 years of age has won titles in three weight classes, which speaks of his quality and projection. He captured the lightweight belt in December 2019 when he defeated Cuba’s Yuriorkis Gamboa by unanimous decision in Atlanta.

He defended that crown against Leo Santa Cruz in October 2020 with one of the most impressive knockouts of that year and now he will make the second defense. It is worth mentioning that Davis fought last June against Mario Barrios at super lightweight and will now return to the lightweight division.

Isaac Cruz, on the other hand, appeared as the best replacement option once Rolando Romero (mandatory challenger) could not take the fight due to different problems. Cruz is one of the best opponents available for Davis as he is ranked No. 8 and is on an impressive streak.

The 23-year-old “Pitbull” has made a name for himself in the United States with his recent performances. In October 2020 he knocked out Diego Magdaleno and in 2021 he beat Argentina’s Jose Matias Romero and compatriot Francisco Vargas.

The bout will be broadcast on Showtime and all pre-fight promotional activities will take place this week. Davis is undefeated in 25 fights, 24 won by knockout, and Cruz has 22 wins, 1 loss, 1 draw and 15 knockouts.

Pride of the North at England Boxing National Youth Championships 2021 Round 12: 2021 What a year for Boxing it has been!