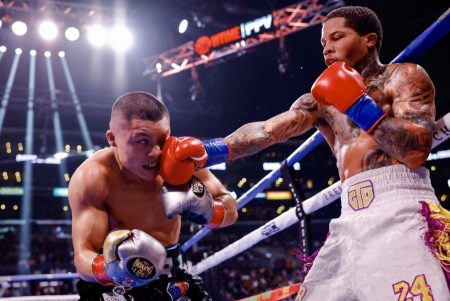 Boxing superstar and five-time world champion Gervonta “Tank” Davis put his boxing skills on display, winning a rousing 12-round round unanimous decision over the relentless Isaac “Pitbull” Cruz to retain his WBA Lightweight World Title in front of a star-studded, sellout crowd of 15,850 at STAPLES Center live on SHOWTIME Pay-Per-View, in an event presented by Premier Boxing Champions.

The atmosphere in the arena was electric, with scores of current and former NBA stars in attendance, including Earvin “Magic” Johnson, Kawhi Leonard, Dwight Howard, Kenny Smith, Kevin Garnett and Paul Pierce among others.

Accompanied by superstar rapper Lil Durk, Davis entered the ring in Laker purple and gold; tassels along his trunks with the late Kobe Bryant’s number “8” and “24” on each side. Cruz celebrated his Mexican heritage with a mariachi band behind him as he strode toward the ring.

There was no feeling-out process in the first. Cruz charged at the defending champion, pinning him against the ropes and wailing away.

“That’s my style. ‘Pitbull’ is always going to be on the attack,” said Cruz. “I think we retained rhythm from the start to the end.”

Davis found his rhythm in the second and third, circling the ring and walking Cruz into shots. In the fourth, Cruz concentrated his attack on the body, pounding Davis’ ribs.

The 27-year-old Baltimore native turned on the power in the fourth, alternating between the right hook and left cross behind his southpaw stance. More punishing blows came from Davis during the fifth.

“He’s a shorter fighter, so I was throwing down on the top of his head,” said Davis. “I hit him with my knuckle and messed it up. I hurt my hand in the sixth round. No matter if the opponent is taller or shorter, I’ve got to get through it. He’s a warrior. Even though he didn’t win, a star was born tonight.”

“It was right around the fifth round I saw that his hand wasn’t working correctly,” Cruz observed.

Davis boxed beautifully in the middle rounds, firing quick shots and pivoting away from the return fire. A right hook in the eighth briefly buzzed Cruz and brought the audience to their feet. But just when it appeared as if the fight was slipping away, Cruz fought fire with fire, landing a flush uppercut seconds before the bell.

The 23-year-old Mexican picked up the pace in the latter rounds, keeping Davis on his toes and pounding away. Davis held his own, fighting back on even terms until the fight’s end.

“Viva Mexico. I have nothing to say, the fans are speaking on who won this fight,” he said.

“L.A., we did it for Kobe,” said Davis. “At the beginning of the fight, he came on strong. I felt as the fight was going, he was breaking down. But I hurt my hand, so I wasn’t able to get him out of there.

“Whatever the best opportunity is for me, I’ll do it. All of them guys are easy work. I’m the top dog.”