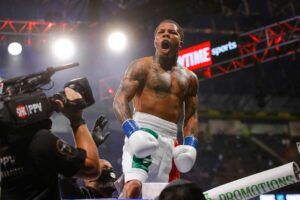 Gervonta Davis will move up a category to challenge the World Boxing Association (WBA) Super Lightweight Champion, Mario Barrios, on June 26th. The bout will be broadcast on Showtime and the venue will be determined in the next few days.

Davis last fought on May 31st when he defended his lightweight belt against Leo Santa Cruz and gave the Mexican the KO of the year. Now he will be looking for a new belt in his first fight at 140 pounds.

The challenge will not be easy for Gervonta, who will have to face the current WBA champion of the category, Mario Barrios. The San Antonio native of Mexican descent is also undefeated and will make the second defense of the crown he won in September 2019 against Batyr Akhmedov. “El Azteca” made the first defense of his title on the same evening Davis faced Santa Cruz and defeated Ryan Karl by knockout to retain his belt.

The showdown will be one of the most eye-catching in the series of fights announced by Showtime a few days ago. Gervonta, 24, has a record of 24 wins, no losses, and 23 KOs, while Barrios has won all 26 professional fights he has had, 17 of them before the limit.