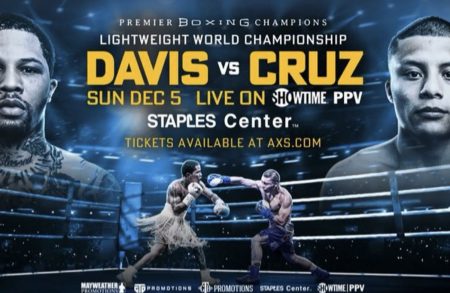 On December 5th Premier Boxing Champions presents Gervonta Davis vs Isaac Cruz live on FITE straight from Staples Center in Los Angeles, California. In the main event of the evening the undefeated five-time world champion Gervonta “Tank” Davis defends his WBA Lightweight title against hard-hitting Isaac “Pitbull” Cruz. Who will come out on top? Who will be the new WBA Lightweight Champion?

Rising super welterweight star Sebastian “The Towering Inferno” Fundora will square off against fellow unbeaten Sergio Garcia in a WBC Super Welterweight World Title Eliminator that serves as the co-main event of the Gervonta Davis vs. Isaac Cruz SHOWTIME PPV on Sunday, December 5 in a Premier Boxing Champions event from STAPLES Center in Los Angeles.

The pay-per-view will begin at 8 p.m. ET/5 p.m. PT and will also feature hard-hitting middleweight contenders Sergiy Derevyanchenko and Carlos Adames squaring off in a 10-round battle. Kicking off the pay-per-view, top featherweight contender Eduardo Ramirez faces former title challenger Miguel Marriaga for 10 rounds of action.

Tickets for the live event, which is promoted by Mayweather Promotions, GTD Promotions and TGB Promotions, are on sale now and can be purchased at AXS.com.

“This is a pay-per-view undercard that perfectly fits with what the main event between Gervonta Davis and Isaac Cruz will deliver – all action from start to finish,’’ said Leonard Ellerbe, CEO of Mayweather Promotions. “Sebastian Fundora, Sergio Garcia, Sergiy Derevyanchenko, Carlos Adames, Eduardo Ramirez and Miguel Marriaga are all hard-hitting boxers who come to fight and are looking for the knockout. Fans that purchase tickets to STAPLES Center or tune in to SHOWTIME PPV on Sunday, December 5 can expect explosive entertainment from start to finish.’’

Fundora (17-0-1, 12 KOs) continues to rise up the super welterweight ranks and recently delivered his most impressive victory to date by stopping Jorge Cota in four rounds in May. The six-foot-six brawler has reached this point by showing off the skills of a rugged boxer who is more comfortable fighting on the inside than most. Born in West Palm Beach, Fla. to his Mexican mother and Cuban father and trainer, Freddy – both boxers – the 23-year-old now lives and trains in Coachella, Calif.

“I’m super excited to be back in the ring,” said Fundora. “I haven’t stopped training since my fight against Cota and I’m always prepared for every opportunity that arises. I don’t know much about Garcia, but my promoter has told me for the past two years that he’s from Spain and he’s ranked number two in the WBC. So it only makes sense for me, being the number four-ranked fighter in the WBC, that we face each other. This is going to be an exciting fight on December 5.”

The 29-year-old Garcia (33-0, 14 KOs) will bring an edge in pro experience into his U.S. debut against Fundora on December 5. Fighting out of Torrelavega, Cantabria, Spain, Garcia has competed professionally since 2012. He ascended the rankings by traveling to the U.K. to defeat then unbeaten Ted Cheeseman on his home soil in 2019 and followed up with a triumph over veteran contender Sergey Rabchenko. Garcia has added three victories since then, including 2020 wins over Pablo Mendoza and Gregory Trenel.

“I want to thank my team for giving me this opportunity to show my boxing skills to the U.S. audience,” said Garcia. “I’m very excited to make the most of this chance that I have. After winning four European championships and other important titles, I feel that I’m ready to win a world title. I am only focused on Sebastian Fundora, but after this fight I want Jermell Charlo or Brian Castaño.”

A 2008 Olympian for his native Ukraine, Derevyanchenko (13-3, 10 KOs), will seek another opportunity at a middleweight world title. Known as “The Technician” and now training out of Brooklyn, Derevyanchenko is long established as a top middleweight contender, having faced the likes of Jermall Charlo, Daniel Jacobs and Gennadiy Golovkin. He owns victories over contenders including Tureano Johnson, Jack Culcay and Sam Soliman. .His most recent fight ended in a decision loss to Charlo in a SHOWTIME PPV headlining fight in September 2020.

“I’m excited to get back in the ring and continue my journey toward becoming world champion,” said Derevyanchenko. “Adames is a good fighter and I respect what he can do, but he’s standing in my way right now. I’m looking forward to this challenge and I can’t wait to give the fans another great fight.”

A native of Comendador, Dominican Republic, Adames (20-1, 16 KOs) fights out of New York City as he seeks to earn a second shot at a world championship. The 27-year-old defeated a slew of contenders including Frank Galarza, Joshua Conley, Alejandro Barrera and former Champion Carlos Molina on his way to a 2019 title shot that he lost by narrow decision to Patrick Teixeira. In his most recent outing, Adames scored a third-round TKO over Alexis Salazar on the Davis vs. Barrios SHOWTIME PPV undercard in June.

“I am very happy to return to action on December 5,” said Adames. “I’m having an excellent and very demanding training camp, so my opponent better be 100% ready. It’s very exciting to be on the undercard of this huge event. My fans expect a great performance from me and I’m going to deliver it.”

Fighting out of Sinaloa, Mexico, Ramirez (25-2-3, 12 KOs) has risen up the featherweight rankings with three-straight sensational knockout victories. He stopped then-unbeaten Leduan Barthelemy in November 2019 before blasting out Miguel Flores in December 2020 and most recently dropping Isaac Avelar in May. The 28-year-old is currently riding wins in five of his last six fights since losing to then 126-pound champion Lee Selby in 2017. He’s won 16 of his last 19 fights overall, with his only other blemishes coming in a draw against Barthelemy that was later avenged, and a decision loss to Claudio Marrero.

“I can’t wait to be back on another big card against another very good fighter in Miguel Marriaga,” said Ramirez. “He’s very strong and he has good experience against top fighters. Vasyl Lomachenko is the only one to stop him, but I will be the second because I need to make a statement with this fight and show everyone that I’m ready to fight for the title.”

A former world title challenger at 130 and 126 pounds, Marriaga (30-4, 26 KOs) most recently stopped Jorge Garcia Jimenez in April to make it victories in five of his last six outings since 2018. The 35-year-old fights out of Arjona, Colombia and has fought professionally since 2009. Marriaga went the distance in a pair of featherweight title fights against Oscar Valdez and Nicholas Walters, in addition to losing a super featherweight title fight to Vasyl Lomachenko.

“I am training very hard for this fight as I always do,” said Marriaga. “I’m very happy with my All-Star Boxing team for getting me this fight. Winning on December 5 will propel me to another world title fight. My only goal is to achieve my childhood dream of becoming a world champion and I’m not going to let this opportunity slip by me.”

Super welterweight contender Luis “Cuba” Arias will take on veteran Vaughn Alexander in a 10-round showdown that tops the non-televised undercard this Sunday, December 5 in a Premier Boxing Champions event from STAPLES Center in Los Angeles.

Born in Milwaukee, Arias (19-2-1, 9 KOs) returned to the ring in June and earned a career-best victory in defeating former unified champion Jarrett Hurd on the Mayweather vs. Paul SHOWTIME PPV undercard. The 31-year-old has faced top competition throughout his career, including going the distance with former middleweight champion Daniel Jacobs in a 2017 duel. Arias racked up wins in his first 18 pro fights after turning pro in 2012 and the Mayweather Promotions’ fighter now trains in Las Vegas. He will be opposed by the St. Louis-native Alexander (15-6-1, 9 KOs), who most recently fought to a split-draw against Winfred Harris Jr. in August. The older brother of former two-division champion Devon, Alexander owns a victory over previously unbeaten Money Powell IV in 2019.