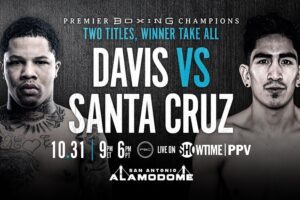 The Gervonta Davis vs Leo Santa Cruz Showtime PPV undercard fighters on the October 31st previewed their respective bouts during their press conference.

Mario Barrios: “I’m super amped for this type of fight. Ryan and I have known each other forever and we know the style that the other person will bring to the ring. For the fans at Alamodome and watching on pay-per-view, they’re in for a great fight.

“I couldn’t be happier to be in one of the first fights with a crowd since the pandemic. Having my first defense be in my hometown of San Antonio is huge. The feedback I’ve been getting so far from my fans has been incredible. Onfight night that we’ll both have our fan bases there for an exceptional night of boxing.

“I know that come fight night I’ll be facing the best version of Ryan Karl that we’ve seen. He’s training the same way and expecting that from me. So it’s going to be an action-packed fight and the fans will not be disappointed.

“I don’t feel any pressure fighting at home. Every time I fight at home, the energy has been unreal. If anything, it’s more motivating.

“We’ve watched my fight against Batyr Akhmedov a couple times. I’m a warrior and I showed that in the fight. We made all the changes we needed to in this camp and I’m going to show them on October 31.

“I’m very proud of the Akhmedov fight. Every great fighter has had close fights like that. It was a learning experience.

“I know the route that Karl has had throughout his career and I know he’s taking this opportunity and coming 100% ready. I’m planning to keep the world title in San Antonio, so it’s going to be a great battle.”

Ryan Karl: “This fight is going to be a big deal. It’s really surreal, to an extent. We’re very excited and working really hard and putting in the work. It couldn’t be better that it is taking place in Texas with fans. It’s going to be a big Texas showdown.

“I’ve definitely evolved as a fighter. I’ve trained harder than I ever have before. Ronnie [Shields] has talked to me about staying calm and getting ready for the moment and what it means to be in a world title fight. It’s about just staying focused and handling business. We have to remember we are there for business and nothing else. This is no pleasure but all work, no play. And he’s keeping me focused on those things and getting me in the best shape of my life.

“I’ve known Mario forever so as far as knowing each other and styles, we’re familiar. But we’ve never been in the ring with each other so we are really just guessing what we are going to do in there. As far as how we’ll come out and fight, we really won’t know until we are in there with each other.

“I expect it to be a fan-friendly fight. A true Texas fight. As far as how it’s going to play out, I really don’t know. People make adjustments in the ring. I expect us both to come to win and do so at all costs and just make it a very, very fan-friendly fight.

“I don’t really feel any pressure for this fight at all. It really doesn’t make any difference to me that we are fighting in San Antonio, or not. It’s nice to be fighting in Texas because I’m a Texan and I’d like to fight here and never have to leave. But I don’t feel any pressure at all. I’ll fight anybody, anywhere. There’s nobody else in the ring but me and him so it doesn’t really matter in the end.”

Regis Prograis: “I’m very excited for my first fight as part of the PBC stable. I’ve been wanting to come over to this side for a long time and it’s finally happening. When something bad happens, something good usually happens off of that so this is perfect. I’m in Katy, Texas, which is a two-hour drive from San Antonio, is a big fight town. Plus, this is the first fight back where we’re having fans. Everything is working out perfectly and I’m so excited to be on such a big card and to get back in the ring.

“My next move depends on what’s offered to me. But first off, I have a tough fight in front of me. I’m focused on Juan Heraldez. There are a lot of things on the table for me after this, but I have to get past him first. I do yearn to be a champion at 140 pounds again before I move up to welterweight. That is the plan. But the landscape of boxing changes so much that it’s so hard to predict. You never know what’s going to happen.

“There are a lot of people out there right now for me to fight. Adrien Broner, Josh Taylor, Jose Ramirez. Me and Josh Taylor are definitely going to fight each other again. No matter what, we have to fight. The fight was too close and it was too much of a big deal out there in the U.K. for that not to happen again. I definitely want to fight Ramirez. I feel like he’s ducked me for a little while. And the Broner fight could definitely be a huge fight. All of those names are who I’m looking for. But it’s one step at a time and it’s Juan Heraldez next.

“The Taylor fight definitely showed me that there are things I need to improve on. Going into that fight, I questioned myself if I could fight 12 hard rounds. I had only gone 12 rounds against Terry Flanagan but that was a boxing lesson, not 12 hard rounds. I fought 12 hard, hard rounds against Taylor so it was kind of a question in my head before that. Now I know that I can do it. Josh Taylor is a very big puncher and I took his punches like it was nothing. As far as things I need to work on, I guess we’ll see. But I’ve been working really hard and I’ve been in training camp since before the pandemic started. I had a lot of fights that didn’t happen so I’ve been working that whole time, working on different things and busting my ass. I’m going to do whatever it takes to get to the top spot at 140 pounds.”

Juan Heraldez: “In my last fight against Argenis Mendez I learned that I have to really control of the fight. I can’t let there be 50-50 rounds and leave it in the judges’ hands. I have to take as much control as I can over the fight.

“On paper Prograis has a good resume, but when it comes to skills in the ring, it’s a totally different thing. People can say what they want, but skills pay the bills.

“I’ve only watched a couple of rounds against Josh Taylor because that was a fight against a southpaw. I don’t think I can take much from that. I’m a totally different fighter.

“I just believe in my skills and ability. Whether it’s my footwork, speed or overall ability, I don’t believe that he does anything better than me. He had his time at the top of the division, but now it’s my time. It’s my time to shine.

“After this fight I think the whole division is going to fear me. I think it’s going to be hard to find me a fight after I’m through with Regis.”

Isaac Cruz: “[Magdaleno] is definitely a good fighter and has a lot of experience, but me and my team are ready to take advantage of the experience we have and to use it for our purposes to be able to prevail in this fight.

“The fact that this will be the first big fight with fans in the stands in the United States just fills me with happiness. It motivates me even more to do my best at the Alamodome on October 31.

“The Mexican fans know what I’m all about. We will now head over to the United States and show the American fans what Isaac Cruz is capable of. I know I can be a contender with the likes of Gervonta Davis, Ryan Garcia and [Vasiliy] Lomachenko and show people that there is another Mexican fighter that can be a contender and make noise in this division.

“I’m prepared for his experience. It’s going to be a great fight from the start, but as the rounds go on, he will start to realize the fighter I am and the power that I’m capable of.”

Diego Magdaleno: “This is my second fight with my trainer, Bones Adams. It’s a family affair. Boxing is family to me. Going into every fight, being a mature old man that they are calling me nowadays, it feels good because I know where my priorities are. My last win over Austin Dulay was huge because my last team that I had was pretty much saying that I was old, that I was washed up and done. I didn’t like that idea. I went back and rejuvenated my whole team. Rejuvenation over here is Bones Adams.

“You’re never too old to get better and we’re here to serve beatdowns to the young guys. My last opponent was 24 years old coming over to face an old man, and I proved the world wrong. Now everybody is believing again in ‘2FUEGO’. I’m going to start this show off with some fire. They have me opening the show on a stacked card and I’m going to get in there and give it my all.

“I’m surrounded by people who want me to progress. If I believe in myself, I want my team to believe in me and I felt that my old team didn’t believe in me. That’s why you saw what happened in that Teofimo Lopez fight. I’ve learned from my mistakes and moving forward I have positive gym vibes. I have a great coach who has been in the ring with me and knows me personally. I definitely made a huge change and look what I did against Dulay, a guy with vicious knockout power. Numbers and strategies can say one thing, but at the end of the day, when we get in the ring, it’s up to me to prove everyone wrong like I did in my last fight.

“I will be the first fight back with a crowd and I think that favors me. I fight off other people’s energy and you guys will all see that on October 31.”