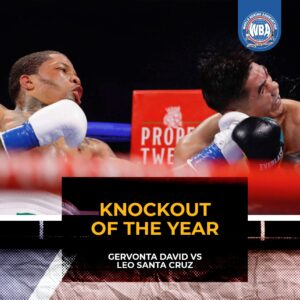 The fight on October 31st between Gervonta Davis and Leo Santa Cruz was designated as the best of the year by the World Boxing Association (WBA), while the knockout delivered by the American to the Mexican also received the award for the best KO of the year.

The fight, held at the Alamodome in San Antonio, Texas, featured the WBA Super Featherweight Super Championship and Lightweight Championship. It ended by knockout in the sixth round after a frantic action by both of them in which they gave their all and made great performances. 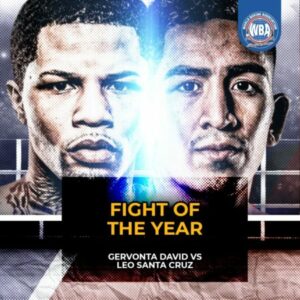 Santa Cruz’s aggressive style crossed paths with the Gervonta’s technical style and the Mexican put him in trouble several times during the fight. However, the American’s strategy and his excellent skills prevailed as the rounds went by.

In the sixth round, a beautiful left uppercut blew into Leo’s jaw and put him to sleep. In spite of the tension due to Santa Cruz’s condition, the spectacular hit shocked the fans by its perfection and great impact, and this is the reason why it has been designated as KO of the Year.

Gervonta proved to be one of the best pound-for-pounders today and one of the top names in the 130-135 pound range.

Billy Joe Saunders: I Want Andrade in February, Then Canelo in May! WBA Names Katie Taylor Female Boxer of the Year 2020