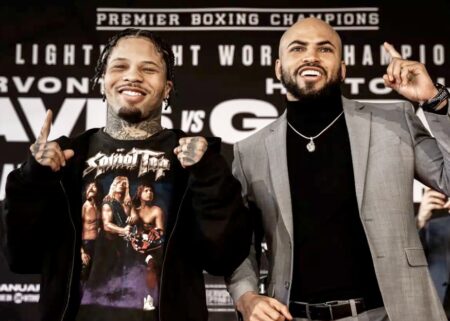 Davis has established himself as one of boxing’s hottest, must-see attractions, capturing five world titles through three divisions with dramatic knockouts and selling out arenas from Los Angeles to Atlanta to New York. The Baltimore native will return to fight in D.C. for the first time since 2016, when he headlines against the dangerous and streaking Héctor Luis García, needing a win to pave the way for the recently announced blockbuster clash against unbeaten star Ryan Garcia in the spring of 2023.

“SHOWTIME® is coming out of the gate strong in 2023 with this hard-hitting card headlined by the sport’s most vibrant star, Gervonta Davis,” said Stephen Espinoza, President, Sports & Event Programming, Showtime Networks Inc. “Gervonta could have taken a softer touch before meeting Ryan Garcia in the spring. Instead, he’s facing a strong candidate for the 2022 Fighter of the Year in the dangerous Hector Luis Garcia and giving back to his fans with this tremendous matchup. We’re thrilled to return to the nation’s capital for the first time since 2016 for what should be an unforgettable start to the New Year for boxing fans.”

“We’re ready to welcome boxing back to the big stage in the DMV region after 17 years,” said Jordan Silberman, General Manager, Capital One Arena. “It’s an honor to host ‘Tank’, a Baltimore native, and Héctor Luis García for what will no doubt be a special night at Capital One Arena.”

Davis (27-0, 25 KOs) currently holds the WBA Lightweight Title and will attempt his fourth defense when he meets Hector Luis Garcia. Davis delivered yet another highlight reel performance in his last bout, blasting out the previously unbeaten Rolando Romero with a powerful left hand in the sixth round of their May 2022 encounter.

In 2021, Gervonta Davis became a three-division world champion by capturing a 140-pound title with a brilliant stoppage over then-unbeaten Mario Barrios, before turning away top lightweight contender Isaac Cruz in a successful December 5 title defense. In October 2020, Davis scored a sensational knockout over Leo Santa Cruz, making him the first person to ever drop the four-division champion. Davis’ elite ability, coupled with his explosive knockout power, has made him a rising force in the sport ever since bursting onto the scene with an explosive knockout victory over Jose Pedraza in 2017. Boasting a knockout rate over 92%, Davis captured his lightweight championship with a 12th-round KO of former unified champion Yuriorkis Gamboa in December 2019.

“I’m very excited to be fighting again in the DMV,” said Davis. “I can’t wait to see all my day one supporters, family, friends, and fans come together for a big fight party. My opponent is an Olympian and a world champion who’s proven to the boxing world that he is a tremendous competitor. I’m in camp working hard and I’ll be ready on January 7 to make this a statement fight for all my future opponents. Make sure you get your tickets now, because this fight is going to be a sellout for sure! Keep supporting me and I’ll fight for you!”

The WBA Super Featherweight World Champion Héctor Luis García (16-0, 10 KOs) is coming off a spectacular 2022 highlighted by two marquee victories. García has fought professionally since December of 2016 after a stellar amateur career that included representing his native Dominican Republic in the 2016 Olympics® and a runner-up finish at the 2015 Pan-Am Games in Toronto.

Now training in Las Vegas under the watchful eye of respected trainer Bob Santos, García scored one of the biggest upsets of 2022 in February, when he dropped and defeated then-unbeaten Chris Colbert. In August, García captured the world title with a one-sided unanimous decision over incumbent Roger Gutierrez, making him a strong candidate for Fighter of the Year honors. The 31-year-old stands at 5-foot-9 and will own a sizeable height advantage over Davis when he makes his lightweight debut on January 7.