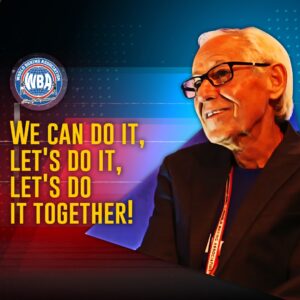 The last 40 years of boxing have brought a broad transformation of the sport. Those changes would not have been possible without great minds directing this discipline and Gilberto Mendoza, the President Emeritus of the World Boxing Association (WBA), led the way in that process.

Mendoza’s term as head of the WBA lasted from 1982 to 2015 and was focused on the athletes. In addition to the creation of social programs that were available to the underprivileged in order to take them off the streets and integrate them into sport, he also focused on adapting the rules to the new times, always maintaining the intention of protecting the fighters.

Several events marked this need for change, such as the death of Duk Koo Kim in 1982, and the arrival of more TV stations and the commercial sphere, which forced a change in order to survive and to continue at the global forefront as well.

Mendoza created the classification system used today before he was president of the WBA. Don King himself praised the system at the time, since many had tried to come up with a formula but had never been able to find one that would please everyone until Mendoza’s initiative arrived.

Other initiatives such as the “KO Drugs” program, the reduction of the rounds, or the implementation of supervisors for world championship fights were thought and promoted by Mendoza. Mendoza was a visionary like few others in boxing history. He dared to implement changes in favor of the sport that he loved, and made it a better discipline for its protagonists, the boxers.