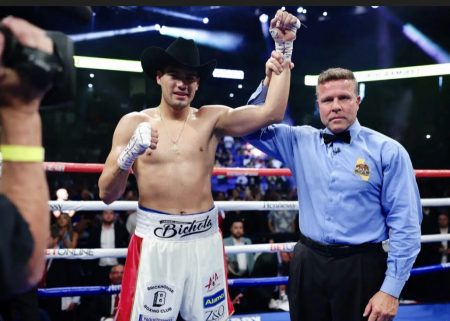 Mexican light heavyweight star Gilberto “Zurdo” Ramirez (44-0, 30 KOs) of Mazatlan, MX, made Mexico proud today as he defeated former interim world champion Dominic Boesel (32-3, 12 KOs) of Freyburg, Germany via knock-out at the 1:33 marker of the fourth round of their scheduled 12-round light heavyweight fight. The fight, pit the #1 Boesel against the #2 Ramirez for the WBA Light Heavyweight Final Title Eliminator at Ontario’s Toyota Arena. Ramirez put his power on display for the boxing world to see to claim the crown as the #1 light heavyweight for the WBA and the new mandatory for the world championship. The event was streamed live, exclusively on DAZN.

“I feel great about my performance,” said Zurdo Ramirez. “As I said, I would put on a spectacular show here in LA. I got the victory via knock-out. I was expecting his best; we were expecting heavy shots. I trained way too hard for this position, and no one will take it from me. I used my distance more, and I attacked the body more. I know my last fight was tough, but I was really prepared for this one. I ate more tacos for this fight. I feel this is my natural weight. Everyone knows I want Bivol. He needs to stop running and sign the contract. I’m coming for you and that belt. I deserve that fight. I think I can beat him since I’m bigger, stronger, and smarter.”

“I thought I would hit him more with my jab,” said Domonic Boesel. “I came confidently to this fight. He got me in the liver with the first punch. I couldn’t do much when I got hit with the body shot.”

In the co-main event of the night, rising lightweight star William “El Camaron” Zepeda (25-0, 23 KOs) successfully defended his WBA Continental Americas Lightweight Title for the second time against the resilient, former world champion, Rene “Gemelo” Alvarado (32-11, 21 KOs) of Managua, Nicaragua in a 10-round lightweight fight. Both fighters gave the crowd the show of the night, as they traded shots back and forth. Zepeda delivered power shots, while Alvarado took them and returned with intensity. Zepeda took the victory via unanimous decision with scores of (98-92), (97-93), and (96-94) all in his favor.

“It was a great fight with a great fighter,” said William Zepeda. “I have a lot to learn, and we need to work on some things. I want to thank Alvarado for the opportunity. He gave me some of his experience, which I am grateful for. We’re going to keep giving it our all. Now to enjoy this victory. Thank you to all my fans.”

Also, part of the live stream, John “Scrappy” Ramirez (10-0, 8KOs) of Los Angeles, CA, will fight for a regional title for the first time against new opponent Jan Salvatierra (8-2, 4 KOs) of Cabo San Lucas, MX, in a scheduled 8-round fight for the vacant NABA Super Flyweight title. The battle ended early after Ramirez landed a power shot that propelled Salvatierra out of the ring. The referee waved off the fight at the 2:25 marker of the first round, crowning Ramirez the winner via knock-out.

“I knew I was going to end the fight via knock-out,” said John Ramirez. “I am excited the fight ended dramatically, but there is more to come from me. I am going to keep working, keep rising until I can claim that world title.”

Opening up the DAZN live stream, fan-favorite Katsuma “El Cuete Japonecito” Akitsugi (10-0, 1 KO) of Hollywood, CA, faced veteran Jose Gonzalez (23–1, 13 KOs) of Guadalajara, Mexico in a scheduled 10-round featherweight fight. Early in the third round, an accidental head-butt opened up a cut on Gonzalez’s left eye. After review from the doctor at :01 of the fourth round, it was determined that the fight could not go on and Akitsgui was given the victory by technical decision.

“I don’t even feel like I fought,” said Katsuma Akitsugi. “I was trying to fight the full ten rounds. Unfortunately, the head butt was an accident. I wanted to continue, but it is what it is. I can’t wait to fight on more Golden Boy cards.”

The Golden Boxing Fight Night live stream on YouTube was headlined by San Diego’s rising prospect Jorge Chavez (3-0, 3KOs). Chavez beat Eduardo Melendez (6-32, 2 KOs) of Ponce, Puerto Rico, via KO in the third round due to Melendez’s corner stopping the fight at the 1:57 mark in their programmed 4-round super lightweight fight.

“I had a lot of success tonight,” said Jorge Chavez. “We had little fall outs in my camp but we pushed through. We came out victorious and my people were here. He was a big fighter so I had to pick him apart. He started getting tired and I went in for the kill. I started throwing sharp shots.”

The third fight of the night featured undefeated fighter Japhethlee Llamido (7-0 3KOs) of Norwalk, California, defeated Edgar Figueroa (4-3-1, 2 KOs) of Palm Beach, Florida, via TKO when a left body shot caused Figueroa’s team to throw in the towel at the 1:35 mark of the fifth round. Their fight was originally scheduled to be a 6-round super featherweight fight.

“I felt good, I stuck to the game plan my team had for this fight,” said Japhethlee Llamido. “My opponent was tough, he had some fights at 130-135lbs so we knew he was going to be strong. We’ll just get ready for the next one.”

Carlos Nava (8-0, 5 KOs) of Pasadena, TX took on Yampier Hernandez (1-1) of Miami, Florida, in a scheduled 6-round lightweight fight. The fight almost went the distance as the referee waved off the fight after Hernandez had his gloves on the canvas and wouldn’t get up at the 1:57 marker of the sixth round awarding Nava the victory by knock-out.

“It’s my first time fighting in a bigger venue than usual,” said Carlos Nava. “I felt amazing. It’s like a dream come true. I thought my opponent was very experienced since he’s a bronze medalist. I was the one hunting him down. Hopefully I get back in camp in a couple days and on to the next fight.”

” I felt excellent,” said Kareem Hacket. “My whole team is here to support and I opened up the night. My opponent was tough. I hit him with everything I got and he was still standing. Props to him for being a veteran in the sport. Hopefully I keep fighting on these cards and eventually get a regional title or maybe go back to Canada and get the Canadian title.”